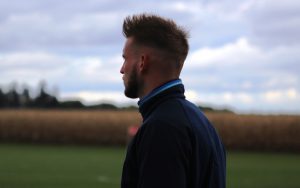 MASON CITY – Leo Driscoll, a native of Huddersfield, UK, will begin his first season as the NIACC women’s soccer coach.

Driscoll, who also will begin his second season as an assistant coach for the NIACC men’s program, will be assisted by Daisy Simms.

NIACC fielded a women’s soccer team from 2001-04 and has reinstated the program for the 2017 season.

Driscoll played two seasons at NIACC in 2012-13. Driscoll was a first-team all-region selection during his sophomore season.

After NIACC, Driscoll played at Missouri Valley College. In Dricsoll’s senior season, Missouri Valley won the Heart of America Conference tournament and advanced to the final four of the NAIA national tournament in Delray Beach, Fla., finishing with a record of 20-3-1.

Before coming to the United States, Driscoll played at the academy level and made appearances in the FA Youth Cup for Wakefield FC. He also played for Huddersfield New College Academy.

Simms previously was a student assistant coach for the Delta State University in Cleveland, Miss.

A native of Portsmouth, England, Simms has been playing soccer since she was four years old. In England, Simms played in the Southern Premier League for Portsmouth Ladies FC and for the county of Hampshire.

Simms moved to the United States in 2012 and began her freshman year of collage at the University of Science and Arts of Oklahoma.

In 2013, she transferred to Jacksonville College in Texas where she broke records for fastest goal scored in school history, fastest hat trick scored, most goals in a game (5) and was selected to the all-region team.

Simms transferred to Delta State in August of 2014.