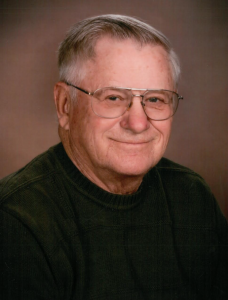 A funeral service for Wayne Lovik will be held 10:30 a.m. Friday, May 5, 2017 at Grace United Methodist Church in Floyd with Pastor Jim Beranek officiating. Burial will be at Oakwood Cemetery in Floyd.

Visitation will be at Hauser Funeral Home in Charles City from 5:00 to 7:00 p.m. Thursday, May 4, 2017 and will continue one hour prior to the funeral service Friday at the church.

Wayne William Lovik, the son of Hendre “Henry” Alford and Anne Mayme (Winterton) Lovik, was born May 25, 1937 in Charles City, Iowa. Wayne was known as being a strong quiet man, who loved his family deeply. He was married to his wife, Virginia, for 62 years. Until the end, they expressed their love for each other. After being diagnosed with Leukemia, he was able to spend hours sharing memories of family gatherings, hunting, fishing, special times, and recipes with family and friends.

This opportunity gave him great enjoyment. He worked in the foundry at Oliver and White Farm for over 37 years. He was very honored to be a volunteer fireman for 30 years, especially the time he served as Floyd Fire Chief. He was actively involved in the Floyd Lions Club. Wayne proudly shared the accomplishments of his children and grandchildren to anyone that would listen. He did not share that he was once the best trap shooter in the state of Iowa. During the last few weeks of his life, he was always thinking about each member of his family, not himself. He surprised us all with a special item that he chose for each of us. Some of these items, he had saved for decades. You knew he had a special gadget to show you, when he had a sparkle in his eyes. Wayne listened, gave us advice, and taught us that family is the most important thing in life.