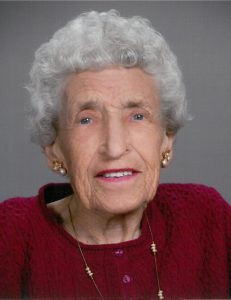 A funeral Mass for Elaine Eppley will be held 10:30 a.m. Friday, April 21, 2017, at Immaculate Conception Catholic Church in Charles City with Reverend Gary Mayer celebrating the Mass. Burial will be at Calvary Cemetery in Charles City.

Visitation will be at Hauser Funeral Home from 5:00 to 7:00 p.m. Thursday, April 20, 2017, with a Scripture Service beginning at 7:00 p.m. Visitation will continue one hour prior to the funeral Mass at the church on Friday.

Elaine Ruth (LaBounty) Eppley, the daughter of Harry and Louise (Tommingo) LaBounty, was born November 8, 1927, in Charles City, Iowa. She attended school at Immaculate Conception High School, graduating in in 1946. While in school, Elaine worked at the Peerless Photo Company in Charles City and continued her working career after her graduation at Oliver/White Farm for almost 40 years.

Elaine was united in marriage to Stewart Eppley on June 18, 1955. The couple made their home and raised their family in Charles City. She was a member of Immaculate Conception Catholic Church in Charles City, where she was involved with the St. Joseph Circle, Sacred Heart Guild and Rosary Society. Elaine loved going to Clear Lake, riding her bicycle around Charles City, attending parades, gardening (both flower and vegetable) and canning her produce. Elaine and Stewart traveled to The Terp Ballroom in Austin, Minnesota, The Surf Ballroom in Clear Lake, Iowa and other area dance halls to enjoy dancing and listening to music. She also enjoyed bus trips to a number of area casinos to do a little gambling. Most of all, Elaine loved spending time with her family and other loved ones.

She was preceded in death by her parents; husband, Stewart in 1999; brother, Keith LaBounty; and sister, Lorraine (Gene) Krueger.