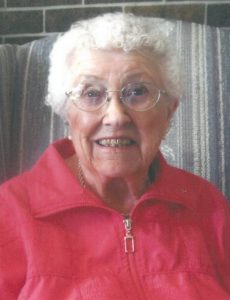 Edna McCoy, 103, of Charles City, passed away Wednesday, March 22, 2017 at the Floyd County Medical Center in Charles City with her family by her side.

A funeral Mass for Edna McCoy will be held 10:30 a.m. Monday, March 27, 2017 at Immaculate Conception Catholic Church in Charles City with Reverend Gary Mayer celebrating the Mass. Burial will be at Calvary Cemetery in Charles City.

Visitation will be at Hauser Funeral Home from 3:00 to 6:00 p.m. Sunday, March 26, 2017 with a Rosary beginning at 3:00 p.m. Visitation will continue one hour prior to the funeral Mass on Monday at the church.

Edna Johanna (Gerner) McCoy, the daughter of Frank and Theresia (Satran) Gerner, was born February 5, 1914 in Clayton County, Iowa. She and her family moved to the Charles City area when she was very young and she received her education at Roseville. On February 5, 1935, Edna was united in marriage to Francis Anthony McCoy at St. Mary Catholic Church in Roseville and the couple made their home in the Charles City area. She helped Francis on the farm raising chickens to sell eggs while also taking care of the household and children. They moved into Charles City in the late 70’s after having their farm sale.

She was preceded in death by her parents; husband, Francis, on December 6, 1993; son-in-law, Larry Mehmen; sister, Florence Tykal; and brother Ed Gerner.