MASON CITY – A woman who was caught twice with illegal drugs in recent weeks and faces serious charges is no longer on the run after skipping her court date in Mason City.

A warrant was issued for the arrest of 22-year-old Alyssa M. Sandry of Forest City on December 22, 2015 when she skipped her arraignment hearing in Cerro Gordo county district court. Sandra had been charged with second-offense possession of an illegal substance and two counts of unlawful possession of a prescription drug after a traffic stop last December at College Drive and 12th Street NE – the north entrance to the NIACC campus.

Sandry was booked into the Cerro Gordo county jail Saturday morning just before 5 AM. According to Mason City police, at about 3:42 AM, officers responded to a report of a suspicious subject running through yards near 16242 245th Street on the city’s far south side near the Ashley Inn. Officers located Sandry and arrested her.

She was charged during the Mason City traffic stop with:

Sandry also faces felony drug charges out of Winnebago county. The sheriff’s office there charged her back in July of 2015 with two controlled substance violations. She pleaded not guilty in August and has had several trial dates, each one postponed. She now awaits a March 2 jury trial. 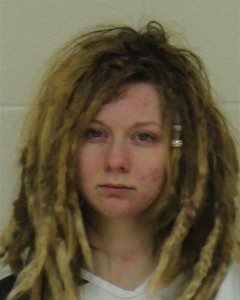