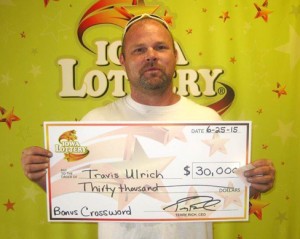 CLIVE, IOWA – A Mason City man said he needed confirmation that he’d won a big lottery prize before he started to celebrate.

Ulrich said he purchased his winning ticket June 24 at Tobacco Outlet Plus, 2480 Fourth St. SW in Mason City, and scratched it off the same day.

“I had to go check it at a gas station, thought it was like $300,” Ulrich told lottery employees Thursday as he claimed his prize at the lottery’s regional office in Mason City.

Ulrich said he kept news of his big win a secret until he claimed his prize from the lottery.

Ulrich said his lottery winnings will be put toward bills.