CLEAR LAKE – A local man is in jail on a charge of felony willful injury after firing a BB gun at a woman, striking her a number of times.

Clear Lake police were summoned to stop a fight Monday evening at about 6:33 PM at the 700 block of North 7th Street. Clear Lake police tell NIT they interviewed an injured female who was shot by 25-year-old Tyler Anton Meuer, of Mason City. “The female was shot with the bb gun in the chest, stomach, and temple area,” a police spokesperson said.

Meuer was taken into custody by Clear Lake officers and charged with felony Willful Injury. He remains held in the Cerro Gordo county jail on $10,000 bond as he awaits a July 10 court date.

Meuer has been arrested numerous times, including several occasions already this year. He was paroled from prison in 2012, and was soon arrested after stealing items and rummaging through people’s belongings at the Mason City pool. In July of 2013, he was with two other men, pushing a stroller on Carolina Avenue in Mason City when a police officer approached. He, along with the other two men, ran from the officer, still pushing the stroller, down the steep Carolina hill. He and one other man were soon caught, hiding in an apartment house, will the baby. He was arrested for public intoxication and interference with official acts. The infant was released to the mother who was in the apartments. This year, Meuer was arrested as he ran from he Kohl’s department store after allegedly stealing items. He has also been charged by Clear Lake police this year with third degree theft. 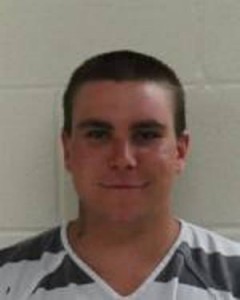