MASON CITY – A man charged with felony sexual abuse in the third degree was able to work out a plea deal to a lesser charge of assault. He had maintained his innocence since the charge was brought this summer.

Spencer William Clausen, age 21 of Mason City, was arrested in June by Cerro Gordo county law enforcement on a charge of felony sexual abuse in the third degree (709.4(1)(a)), which states that the alleged victim at the time of the assault suffered from a mental defect or incapacity which precludes giving consent.  Authorities say that Clausen had nonconsensual sex with an 18-year-old female from Mason City at a rural Plymouth residence.

Clausen pled guilty on November 13 to assault. He was given a 30 day suspended jail sentence, placed on one year probation, and ordered to pay $575.15 in court costs and restitution.  A no-contact order was set for a year between Clausen and the victim.

Clausen, a cook at the Other Place in Clear Lake, said on June 6th via social media, after being released from jail, that he had lots of support.

“[sic] Thank you everyone for all if ur support and concern for me. You have really helped me through this so much already! I couldn’t ask for a better set of people in my life. Thank you all for untying the knots in my stomach today I love you all!!!”

Earlier, on June 5th, he said “[sic] ur gunna put a guy like me through this! i have a class c felony charge and now slashed tires and looking at minimum of 1000 dollar fine, up to 10 years in prison. i never did anything to deserve this  those who know me, know i could never do something like this!” 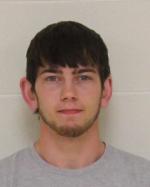