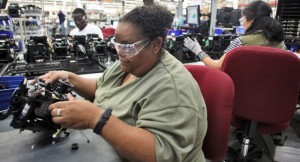 WASHINGTON — The number of persons employed in the U.S. increased by 248,000 in September, and the unemployment rate declined to 5.9 percent, the U.S. Bureau of Labor Statistics reported today. Employment increased in professional and business services, retail trade, and health care.

“The nation’s economic recovery continued in September with the addition of 248,000 new jobs. It was the 55th consecutive month of private-sector job creation, during which time businesses have created 10.3 million jobs. In 2014, we have experienced the most robust year-to-date private-sector job growth since 1998. The unemployment rate fell to 5.9 percent, its lowest level since July 2008.

“Over the last year, there are 811,000 fewer people working part time for economic reasons. Hispanic unemployment now stands at 6.9 percent, a full two-percentage-point drop from a year ago. Hispanic poverty is also down significantly. And in 2013, overall childhood poverty had its largest year-to-year decrease since 1966.

“Things are unquestionably moving in the right direction, but we can do even better. The Labor Department and the Obama administration are working harder than ever not just to create more jobs and accelerate growth, but to strengthen the middle class and build an economy that works for everyone. Just this week, the Labor Department awarded more than $450 million to help community colleges train workers for the jobs of the 21st century – a bold long-term investment in our skills infrastructure similar to President Eisenhower’s interstate highway investment in our physical infrastructure nearly 60 years ago.

“On Wednesday, we helped nearly 200,000 workers get a raise, taking final steps to implement President Obama’s executive order increasing the minimum wage to $10.10 per hour for workers on federal service and construction contracts.

“And we recently invested in states’ capacity to explore paid leave policies. As long as we remain the only industrialized nation where paid leave is not the law of the land, we are hurting both our families and the economy. Our failure to lead on leave keeps women out of the labor force, which costs us in valuable human capital and economic activity.

“Six years after the near-collapse of the U.S. economy, we have come a long, long way. The new foundation for growth is in place. The challenge now is to expand opportunity further, to help more people benefit from this recovery, and to ensure that prosperity is broadly shared.”

The latest numbers in Iowa, released September 19, show “gains in labor force, total employment, and nonfarm employment in August,” said Teresa Wahlert, director of Iowa Workforce Development. “The state’s labor force participation rate also continued to trend up this month, as an increasing percentage of Iowans seek employment.” The number of unemployed Iowans remained at 76,700 in August. The current estimate is 1,400 lower than the year ago level of 78,100. The total number of working Iowans increased to 1,626,300 in August from 1,623,900 in July. This figure was 2,400 higher than July and 31,300 higher than one year ago.