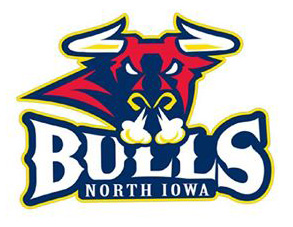 MASON CITY – The North Iowa Bulls earn their first standing points of the season with a series split at St. Louis in non-division action. On Friday, September 26, the Bulls peppered the net for 55 shots, only to lose 4-2 behind a pair of third period goals from Franky Melton. The Bulls earned scores from Zach Johnston (Monona Grove, WI) and Joe Burgmeier (Mason City), with Kurt Halbach (Madison, WI) assisting on both tallies since being picked up from Cincinnati via trade earlier in the week.

This Friday (Oct. 3) and Saturday (Oct. 4), when the Bulls travel to Breezy Point and Minnesota, respectively, in NA3HL West Division action, it’s the debut of Hockey Night in Mason City. Fans can come out to the North Iowa Youth Center, 138 5th Street SW in Mason City, to view both games on big screen TVs while partaking in the other activities the center has to offer. “The Voice of the Bulls” Alvin Washington and analyst Vinnie Perricelli will be on hand to call the action. Doors open at 6:30pm each night and for more
information, contact the North Iowa Bulls at 641-423-4625 (GOAL).