ROCKWELL CITY – A man who shot a police officer in the chest and killed him will spend the rest of his life in prison.[prison]

Corey Trott was given a life in prison for fatally shooting Rockwell City police officer Jamie Buenting last year. Trott was previously convicted on September 5 for the shooting, which occurred during a standoff last September.

Officer Buenting was participating as part of regional tactical team that was attempting to execute an arrest warrant on the 33-year-old Trott for a prior incident involving an attack on his own mother. 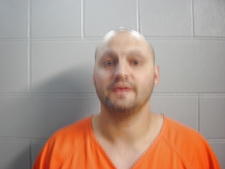