MASON CITY – A Mason City man and an unknown accomplice are accused of robbing a south side couple and assaulting them.

According to police, late on the evening of May 31, a robbery was reported at the 1500 block of South Coolidge Avenue. Benjamin Cooper Duitscher, age 28 was allegedly at the residence with another person. The pair is said to have robbed and assaulted the couple who resides at a residence there. The injuries were not serious, and both refused medical treatment after an ambulance arrived. Duitscher and the other person left prior to police arriving.

Police applied for an arrest warrant for Duitscher, and he was arrested on June 8th on the warrant as well as a dDisorderly conduct charge stemming from a neighbor dispute.

Police said that on the evening of June 8th, a neighbor dispute was reported in the 1000 block of North Taylor Avenue. The argument apparently became physical and minor injuries were reported to some of those persons involved. Police arrested Duitscher, Daniel Percy, and Benjamin Percy for Disorderly Conduct and took them to jail. 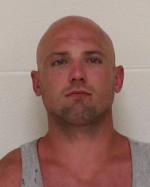