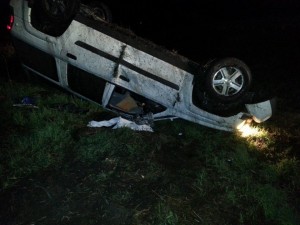 RURAL CERRO GORDO COUNTY – A vehicle was found in a ditch south of Clear Lake early Sunday morning, and police were sent to investigate.

A Cerro Gordo deputy responded to a 911 call around 5:00 AM Sunday morning, for a one vehicle rollover on 170th Street, just east of Grouse Ave.

A witness who came upon the vehicle at the scene said, “It must have just happened before I came up on it. The lights and stereo were still going. After calling it in, I went into the ditch to see if anybody was hurt. I couldn’t find anyone.”

The police officers called the parent of the driver and was informed that he was not at home.

“An officer broke the back window of the SUV to see if anyone was still in there, and there was no one inside. I walked the ditch and the cornfield for a while,” said the witness. “I was worried that someone may have flown out and hit the big boulder that was close to the truck.”

According to the Cerro Gordo County Sheriff’s Office, they took a report of vehicle on its top at the location south of Clear Lake and confirmed that upon arrival at the scene, no subjects were located. Police said that photographs were taken and the vehicle was towed away by Tony’s. They also reported that an individual called in shortly later Sunday morning stating there was a subject walking along highway. The subject was the driver of rolled vehicle and was cited for failure to maintain control, leaving the scene of an accident, and no insurance. NIT is awaiting the release of the name of th driver.