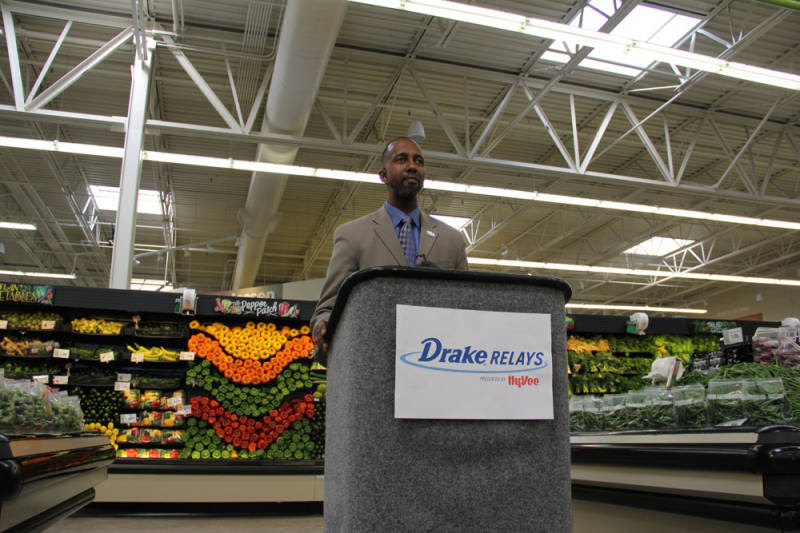 DES MOINES – Drake Relays director Brian Brown unveiled a new event to the Drake Relays Presented by Hy-Vee lineup with the creation of the High Jump at Hy-Vee. The one-of-a-kind event will pit some of the world’s top high jumpers against each other inside Hy-Vee’s new store in Waukee, Iowa.

The unique configuration of the event will allow the current field of eight confirmed jumpers, which includes three World Championship medalists and three Olympic medalists, to take off from the aisles of Hy-Vee in a setting that will bring fans and shoppers face-to-face with world class athletes on April 21 at 6 p.m..

The women’s event will feature Olympic and World Championship silver medalist Brigetta Barrett,  World Championship bronze medalist and 2013 Relays champion Ruth Beitia of Spain and American record-holder Chaunte Howard-Lowe. The men’s event includes Moscow World Championship bronze medalist Derek Drouin of Canada and American finalist Erik Kynard.  The latter was a silver medalist at the 2012 Olympics and won a pair of NCAA Championships at Drake Stadium for Kansas State in 2011 and 2012. The event will not replace the traditional pole vault event inside Drake Stadium, but rather enhance the week-long spectacle of the Relays and give its athletes the opportunity to take their sport to new venues and audiences.

“It’s going to be a great event in a unique setting much like we do for pole vault in the mall. This is an opportunity for the Drake Relays and Hy-Vee to show the community what can be done with a strong partnership.”

While the action inside Hy-Vee will certainly capture interest in much the same way as the Pole Vault in the Mall has become a marquee event, Brown also announced one of the strongest men’s 400-meter fields ever assembled. Stepping onto the Blue Oval in April will be the gold, silver and bronze medalists from the 2013 World Championships along with 2012 Olympic gold medalist Kirani James. All together, the current field includes the top-four 400-meter runners in the world. American LaShawn Merritt headlines the field as well and ranked No. 1 in the world following his gold-medal performance at last summer’s World Championships. Joining him are World Championship silver medalist Tony McQuay and bronze medalist Luguelin Santos of the Dominican Republic. Santos, one of the top young quarter-milers in the world also won the silver medal at the 2012 Olympics just behind James and was also the 2013 Relays champion in the event.

“In the Drake Relays’ 105-year history, there has never been the caliber of talent together that will grace our track in the 400 meters this year,” Brown said. “There’s not another event that’s as graceful and grueling as the 400 meters. It’s going to be a big-time event.”

Less than a month ago, Brown announced the creation of an additional event with the shuttle hurdle relay featuring elite-level hurdlers with the intent being to shatter world records on the Blue Oval. With interest in the event mounting, Brown has already assembled four teams of the world’s top hurdlers to compete. For the men’s event, World Champion gold medalist David Oliver will lead a team that includes silver medalist Ryan Wilson, Antwon Hicks and Joel Brown. They’ll face a team comprised of world record holder Aries Merritt, Jason Richardson, Jeff Porter and Ty Akin.

The women’s teams are equally strong with six of the top 10 ranked hurdlers in the world teaming up. One of those teams will feature Des Moines native Lolo Jones joining forces with World Championship gold medalist Brianna Rollins, 2013 Relays champion Queen Harrison and Vashti Thomas. They will compete against Dawn Harper-Nelson, who is ranked No. 2 in the world, Kellie Wells, Nia Ali and Kristi Castlin.

“I don’t know if there’s anywhere in the world where there’s that much world class hurdling talent assembled,” Brown said. “I’m proud to announce that that talent is coming to Drake Stadium and Lolo Jones is going to be part of it.”

In addition to the exciting action on the track, fans and athletes can make the most of their Relays experience via the various road races that surround the Drake Relays.

Following the opening of Relays week with the High Jump at Hy-Vee, the Grand Blue Mile returns on April 22 with its annual dash through downtown Des Moines. Support for the event has continually grown throughout the community and this year the event will be sponsored by another downtown neighbor as Nationwide Insurance joins Wellmark in serving as the title sponsor.

“Nationwide is thrilled to be a part of the 2014 Drake Relays through our co-sponsorship of the Grand Blue Mile,” said W. Kim Austen, President and COO Nationwide/Allied Group. “At Nationwide, we believe in supporting our members and the communities where they live and work. The Drake Relays have served as a cornerstone of the community for more than a century — we are honored to help support this long-standing tradition and to help promote downtown Des Moines.”

The two longstanding investors in the Des Moines community’s health and wellness pair to stage an event that will feature America’s top milers as part of the USA Championships, competitive runners, recreational runners and fitness enthusiasts of all ages.

“Nationwide coming to the table will help us enhance the event as they’re part of the neighborhood and are excited to be a part of the effort to promote health and wellness in the community,” Brown said.

The Hy-Vee Road Races at the Drake Relays will again include three races, a 5k, 10k and half marathon that will allow the world’s top road racers, amateurs and weekend warriors to compete side-by-side through the streets of Des Moines. All will finish inside Drake Stadium on the iconic Blue Oval with a portion of the proceeds from entry fees donated to local charities in order to support Hy-Vee’s commitment to wellness in the community. The Hy-Vee Road Races present an opportunity for everyone in the community to be actively involved in the Drake Relays.

Interest in the road races is already reaching new levels with registrations well above last year’s marks. Fans who register for the Hy-Vee Road Races next week (Feb. 9-13) will receive a voucher redeemable for two general admission tickets to the Feb. 15 Drake men’s basketball game against Loyola. To secure your spot in one of the three road races, visit www.HyVeeRoadRaces.com.