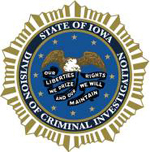 BEDORD, IOWA – As the search for the suspect in Taylor County continues, the Iowa Division of Criminal Investigation (DCI) confirms the Sheriff’s Deputy who was shot late Sunday night is 33 year old Dan Wyckoff. Wyckoff, a two year veteran of the Sheriff’s Office, remains hospitalized, but is in stable condition with non-life threatening injuries.

Law enforcement officials continue searching for the suspect in Sunday night’s shooting and pursuit. The suspect is an escapee from the Clarinda Correctional Facility, Rodney Eugene Long.  Officers believe Long is the individual who shot a Taylor County Deputy Wyckoff late Sunday, August 18, 2013 and subsequently led law enforcement on a 40 minute pursuit.

Officials are urging citizen in and around Taylor County to be cautious and observant.  Long is considered armed and dangerous.  If you see Long, do not approach him yourself but rather, contact authorities immediately.  Long is described as a white male, 38 years old with brown hair and brown eyes. He is 5 feet 9 inches tall and weighs 144 pounds. He has tattoos on his wrists.

Previous reports indicated that Long was wearing a green ball cap. However, this information has not been confirmed. Law enforcement does not at this time have a description of his clothing.

Long escaped from the minimum custody lodge in the early morning hours of Friday, August 16, 2013.  Personal items left in the stolen patrol vehicle indicate that Long is the individual that officials are searching for.

A pursuit ensued for approximately 40 minutes through rural Taylor County.  Officers from several different jurisdictions, including Missouri, responded to the area.  Gunfire was exchanged between the suspect and officers during the course of the pursuit.  The pursuit ended when the suspect rolled the stolen patrol vehicle several times on a rural Taylor County road.  He was able to exit the vehicle and escape on foot.  A manhunt, involving at least a dozen different law enforcement agencies from Iowa, Missouri, and Nebraska, has been underway since moments after the crash.

The wounded deputy was flown to an Omaha hospital where he remains in stable condition. His injuries are not considered life threatening.  His name is not being released at this time.