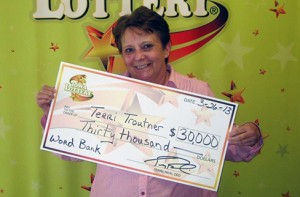 DES MOINES, Iowa – A New Hampton woman was elated when she found out she won the sixth of 12 top prizes of $30,000 playing the lottery’s “Word Bank” instant-scratch game.

Terri Troutner, 60, was still in shock when she came in to the Iowa Lottery’s regional office in Mason City Tuesday to claim her prize, just three hours after she found out she won.

“I had to calm myself down,” Troutner said. “And once I went to the gas station and checked to make sure that I had won; then it set in that it was real.”

Troutner said she was filled with emotion as the gas station manager came out to congratulate her, too.

Troutner has three children and six grandchildren with another one on the way any day. At first her children thought she was joking with them about the win.

Troutner, who works in the distribution department at TriMark Corporation, said she already knew how she planned to spend some of her winnings.

“I have two things I’m gonna do,” she said. “I’m gonna pay off my truck that I bought a couple years ago and re-do my driveway.”