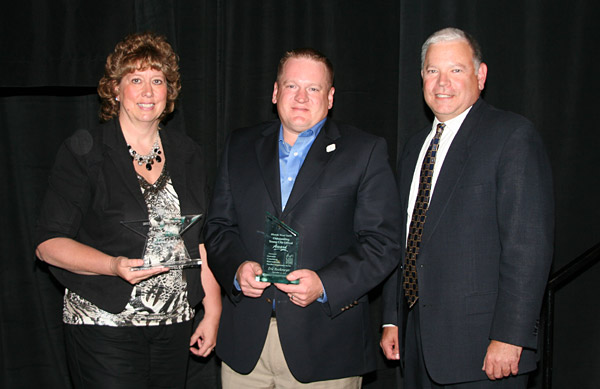 SIOUX CITY – The Iowa League of Cities recognized the city of Mason City as a 2012 All-Star Community at its Annual Conference & Exhibit, which was held in Sioux City from September 26-28.

The All-Star Community Award is the most prestigious honor given by the League to cities. Entries are judged by a panel of former city officials and others familiar with municipal government. Judges determine winners based on innovative efforts in areas such as urban renewal, development, preservation, service sharing or quality of life improvements. This year, Mason City was one of five of Iowa’s 947 cities to garner such recognition for their Community on the March project.

The Mason City Public Library renovation and addition, the restoration to the Historic Park Inn Hotel, the construction of the Architecture Interpretive Center and the Federal Avenue streetscape projects were all pieces of the larger, Community on the March project. Linked by Mason City’s Vision Iowa bid, the success of each piece relied upon the success of the others.

A bond issue to renovate and expand the public library passed and became Mason’s City’s matching funds for Vision Iowa. Set on Willow Creek, a location made famous by the Broadway musical “Music Man”, the updated library serves as a gathering place for the community.

Another famous attraction in Mason City is the Historic Park Inn Hotel, the only remaining Frank Lloyd Wright-designed and built hotel in the world. Once occupied by pigeons and raccoons, the hotel now holds 27 guest rooms and meeting and banquet space.

The streetscape project along Federal Avenue not only updated the city’s underground infrastructure, the above-ground improvements compliment the Prairie style architecture of the Park Inn Hotel which sites along that street. Both the parking created by the streetscape and the city funds used to complete the project were vital parts of the larger Community on the March project.

The award judges valued Mason City’s enhancement of the natural and unique elements of their community. The final piece of the project, the Architecture Interpretive Center, follows this theme by providing a space for visitors to learn more about Prairie style architecture and its role in Mason City.

“There were so many great partners leading the way, the Library Board, the Chamber of Commerce, Vision Mason City, Wright on the Park, River City
Society for Historic Preservation, the City of Mason City…but it was the thousands that touched and influenced this project that made it successful.

“This award goes to the citizens of Mason City. There is no doubt, this is their award.

“Thank you to the Vision Iowa Board and especially chairman Andy Anderson, we owe them the sincerest debt of gratitude.”