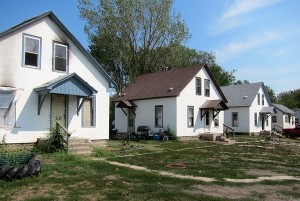 A row of 5 houses on 15th Street NE in Mason City sometimes referred to as “the horseshoe.”

Neighbors in the 000 block of 15th Street NE contacted NIT this morning describing an incident in the “horseshoe” row of houses on the north side of that street.

One person that lives nearby said this morning that multiple police and emergency responders were arriving at the scene just after 1:30 AM.  The caller stated that people were outside shouting, yelling and being belligerent. The caller further stated that she believed a person was brought out of a house there “in a body bag.”

Mason City police confirmed this morning that there was an incident at the above location.  “It was just a man who hit is head,” according to Lt. Ron Vande Weerd. “There was no assault” but a man was hospitalized.

However, another caller early this afternoon stated that police were at the scene until about 4 AM and that the EMT ambulance didn’t leave until about 3 AM.

The caller also stated that police questioned multiple people in the area who were outside and then police entered an abandoned house in the horseshoe, #34, that people are known to enter and hang out in.

After police left, the caller said, people were outside yelling at each other.  One woman said “mind your own business” referring to the incident.

32 Responses to Neighbors talking about incident at “horseshoe” Saturday morning