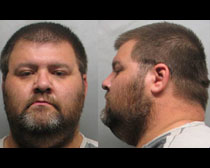 KANSAS CITY, Kan. — A Kansas man, who was arrested in Laredo, Texas, Aug. 10, is the latest suspect to be charged in an international child pornography ring. His arrest is the latest development in a far-reaching international child pornography probe that has resulted in numerous arrests worldwide. Court documents were unsealed Monday in the District of Kansas detailing the charges.

Robert Poe III, 38, of Kansas City, Kan., was taken into custody by special agents with U.S. Immigration and Customs Enforcement’s (ICE) Homeland Security Investigations (HSI). Poe has been charged with three counts of traveling to entice a minor to engage in sexual activity.

According to the criminal complaint, Poe was identified after the arrest of an additional Kansas suspect. That suspect, Michael Arnett, 38, of Roeland Park, Kan., was arrested May 22 after special agents with HSI Boston initiated an investigation and helped to identify victims who appeared in previously seized images of child pornography. Investigators had identified a water bottle in one of the photographs with the name of a swim and scuba center in Johnson County, Kan. With the help of teachers at an elementary school in that county, HSI investigators in Kansas City, Kan., identified the children in the photographs. It was then confirmed that Arnett had produced the child pornography photos.

Following the publicity of the Arnett arrest, Poe was identified in May 2012 after a victim came forward and reported that he and his brother were both sexually molested as minors by Poe and Arnett. One of the victims stated that Poe held a gun to his head when he was a minor, and forced him to perform oral sex. It was later determined that Poe is best friends with Arnett. The victim also stated that Poe is a far worse person than Arnett. Additionally, Arnett had communicated directly with Poe in July 2012, while Arnett was held in federal custody in Leavenworth, Kan.

HSI special agents continue to follow-up on all investigative leads.

“This increasingly disturbing nationwide investigation has its origins overseas,” said Gary Hartwig, special agent in charge of HSI Chicago. Hartwig oversees a six-state area including Kansas and Missouri. “This latest arrest serves notice to those who prey on society’s most vulnerable members, that the shadowy world of Internet anonymity is no barrier to HSI investigators in cooperation with our law enforcement partners.”

“Our office is working closely with Homeland Security Investigations and investigators across the nation to identify any children who have been victims of sexual predators,” said U.S. Attorney Barry Grissom, District of Kansas.

HSI is soliciting the public to identify anyone who may have been victimized by Poe or Arnett. Please contact HSI Kansas at 816-802-8524.

This arrest is part of Operation Holitna, an ongoing HSI-led investigation that originated in Boston. In 2010, the U.S. Attorney’s Office for the District of Massachusetts and HSI Boston arrested Robert Diduca on child pornography production charges. He was convicted andsubsequently sentenced in June 2012. Forensic analysis of Diduca’s computer led investigators to the Netherlands where a Dutch national was arrested and charged with production, distribution and possession of child pornography, as well as the sexual abuse of 87 minors. Since that time, a worldwide network of offenders has been, and continues to be, unraveled, including today’s defendant. Defendants and victims continue to be identified around the world. To date, more than 150 children have been rescued and 46 perpetrators arrested worldwide – including Poe – as a result of Operation Holitna.