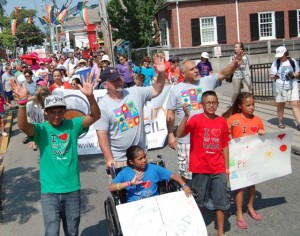 WASHINGTON — Since March, someone has repeatedly banged on the front door of Felix Bermea’s Gilbert, Ariz., home, set bushes on fire and written profanities on the kids’ furniture after breaking in.

Police have been called to the neighborhood almost 60 times by Bermea and his neighbors. Nine police reports have been filed. But the problems continue.

“We’ve never had this happen before,” said Bermea, who lives in the home with his partner of 20 years and their four children.

“This is not your standard ding-dong-ditching,” he said. “It’s bullying, harassing. It’s terrorizing.”

Based on the sheer number of offenses alone, Gilbert police also believe there may be a bias motivation behind the crimes. But they haven’t made that charge because they don’t have the evidence.

“You don’t know what you have until you have a confession, or very pointed evidence like a hate symbol,” said Gilbert Police Sgt. Bill Balafas.

And human rights groups side with the police on this one. Labeling something a hate crime is just not that easy, they say, and jumping the gun on a claim doesn’t help.

Bermea is not as concerned about the motivation behind the harassment as the effect it is having on his kids. He said his 9-year-old daughter, who uses a wheelchair, has been frightened to tears.

“If they want to attack the gay individual that’s me and my partner,” said Bermea, not the kids.

“Everybody wants hate crimes to fall into these very neat packages,” said Tracy Stewart with the Anti-Defamation League in Arizona.

But after meeting with Bermea and the Gilbert Police, Stewart said, her group agreed “that this currently would not be considered hate crime.”

It’s “not a good thing to designate something as a hate crime too early,” Stewart said, since a later reversal might cause people to not report subsequent offenses.

On the other hand, some jurisdictions may be hesitant to call an offense a hate crime, said Ty Cobb, legislative counsel for the Human Rights Campaign.

Balafas said Gilbert Police will not hesitate to classify the attacks against Bermea’s family as hate crimes if they get the evidence.

Of the 2011 hate crimes, two were against African-Americans and two were against Mormons, Gilbert police said. All of the incidents involved hate language and symbols left or written on the homes of the victims.

But when police found a large chalk drawing of a penis on the street a few doors down from Bermea’s house, it could not be labeled a hate crime.

“If it were on their (Bermea’s) garage door … that might lean us in the direction of hate because obliviously it’s directed at them,” Balafas said.

But just because police are not calling them hate crimes, does not mean they have stopped investigating, Balafas said.

“There’s arson. There’s criminal trespassing and there’s harassment that are all being investigated,” he said. “Hate could be a motivation for it or not.”

The Bureau of Justice Statistics estimates that 195,000 hate crimes occur each year across the country, but fewer than half are ever reported to police.

That leaves almost 90,000 hate crimes a year, according to the 2011 BJS survey, sharply higher than the roughly 7,700 hate crimes the FBI reports in a given year.

But while BJS is often cited by civil rights groups that claim hate crimes are underreported, others say the two reports measure two very different things.

The BJS survey involves interviews that ask people about their experiences with crime. The FBI numbers are based on charges, which is a much higher bar, as Gilbert police have learned.

And within law enforcement itself there are two, sometimes opposing, ways of thinking, Cobb said.

A police officer looks to see if there’s evidence to classify an offense as a hate crime, he said.

“A prosecutor has to decide if it (the evidence) is convincing enough to prosecute the crime that way,” Cobb said, so the police designation of an offense as a hate crime could change once it gets to prosecutors.

The large number of apparently unreported or underreported hate crimes does not necessarily mean law enforcers are not doing their jobs, said Lynn Langton, co-author of the 2011 BJS hate-crimes report.

“We cast a wide net … to get at the dark figure of crime (and) the unreported crime,” she said of the survey.

She admits that, to some degree, it’s the household’s perception that determines whether a crime gets labeled a hate crime or not in her survey. She does not, for example, ask what kind of language was used, only if the victim perceived it as bias-motivated language.

For Bermea, the perception is that his family has been victimized by hate crimes since someone first pounded on their front door.

Besides the fact the he and his partner are gay, Bermea said, maybe the fact that his kids are Hispanic or adopted plays a part. Any one of those perceived differences could be considered a bias motivation for a hate crime.

“I’m not one to want to try to convince the world about anything,” he said.

He has received support. A friend set up a Facebook page supporting the family, and organized a march in July to try to pressure police to do more.

After learning about the family’s troubles, the Family Equality Council brought them to Provincetown, Mass., for its Family Week, which supports gay and transgendered couples with children. The Bermea family acted as grand marshals of the parade there.

Bermea was grateful for the vacation, but right now all he wants is for his boys to be able to ride their bikes without somebody jumping out of a car and chasing them, or for his 9-year-old girl to not be so frightened that she struggles out of her wheelchair to hide.

“It’s not about me making a point,” he said. “It’s about my kids, and that’s really the bottom line.”