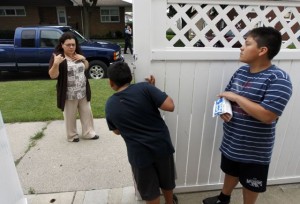 CHICAGO — Fourteen-year-old Samaiya Butler longs for the freedom just to walk to the corner store or a nearby nail shop for a manicure.

But since she lives in the crime-ridden Englewood neighborhood on Chicago’s South Side, her parents won’t let her leave their house without an escort in spite of her pleas.

(PHOTO: AndrewSilvia Villa keeps her sons Andres Limias Villa, 9, left, and Omar Limias Villa, 11, inside the gate of their West Lawn, Illinois home, as the Chicago police search the street near her home on July 26, 2012.)

Even in Brighton Park, a safer neighborhood on the Southwest Side, Lucero Valdez-Contreras, 11, and her 7-year-old brother often ask to ride their bicycles, but their mother won’t let them go beyond the end of their block or spend time with friends who live where gang shootings are more common.

“I’m really never out because my mom, she limits me,” Lucero said with a slight grimace.

For many Chicago parents in communities where the sound of bullets can punctuate the air, this year’s rise in homicides and shootings has led them to take increased measures to protect their children from becoming innocent victims of violence. That often means setting rigid curfews, limiting where their children can play or keeping their days filled with indoor activities.

The result is that children are chafing at the limits on their movements on hot summer days and long for the freedom that older siblings or friends in safer neighborhoods enjoy.

“I want to be able to walk around in a neighborhood and not think about getting shot,” said Samaiya Butler, shrugging her shoulders and rolling her eyes as she sat on the family front porch by her dad.

A number of children interviewed by the Tribune with the permission of their parents seemed resigned to the need for all the precaution. But that doesn’t stop them from frequently complaining or constantly asking to go outside by themselves.

To create her own social life, Samaiya, who is about to start as a freshman at Lindblom High School, has taken to Twitter, where she connects with friends beyond the careful watch of her parents. Her dad has been trying to learn her Twitter handle, but Samaiya confided she has been changing it almost weekly to keep her parents from monitoring her.

Tali Raviv, a psychologist who works with children coping with trauma, said parents who live in more dangerous neighborhoods face difficult decisions that can have a developmental impact on their children. Playing outside may put them at some risk, but limiting their interaction with the outside world also has consequences, from hurting social skills to contributing to depression, she said.

The fear of violence “gets really blown up in a parent’s mind,” Raviv said.

The damage from even witnessing violence can be severe, though. James Garbarino, a professor at Loyola University Chicago who specializes in the psychological impact of violence on children, said youngsters who experience traumatic events can typically take a year to fully recover.

For children who are raised in neighborhoods where violence is commonplace, he said, “it’s hard to say everything’s back to normal because normal is the problem.”

Antoine and Asiaha Butler understand their daughter’s desire to get out and explore. When both were growing up in Englewood decades ago, they were allowed to play outside at least until the street lights came on. They knew their neighbors and walked around freely.

But the couple, who are trying to improve their neighborhood by organizing block clubs and hosting clean-ups, refuse to take any chances with their daughter even when she pushes for independence.

“She’s our only child,” said Asiaha Butler, explaining their protective parenting style. “She does feel a little more sheltered. She tells us every day that she doesn’t want to live in Chicago because of all the shootings.”

In Westlawn, another Southwest Side neighborhood that can see flare-ups of violence, Silvia Villa keeps her two sons, Omar, 11, and Andres, 9, busy with summer programs.

On a recent afternoon, just shortly after the boys returned home from a day of swimming, nearly a dozen police cars converged outside their house.

“Oh, my God! Oh, my God! Stay here!” the boys’ mother yelled as she rushed outside to investigate the commotion. Despite her instructions, the boys trailed outdoors behind her to see what was happening. It turned out police had chased and caught a suspect and were looking for a weapon he discarded.

Villa restricts her boys from being outside alone and takes them to visit relatives in the south suburbs whenever she can. Even when her youngest wants to tend to his garden in his own back yard, his parents insist one of them be present.

But she fears that the restrictions are starting to intrude on her sons’ childhood.

“You got to teach your kids how to walk… You have to teach them how to dodge a bullet,” she said. “It’s so bad this summer, even in your own house, you’re not safe. It’s a very sad childhood.”