Mason City woman turns herself in on warrant

Almyra Elizabeth Sharp, 37, was wanted for fifth degree theft.  She was booked into the Cerro Gordo County Jail Thursday morning just after midnight and remained there Thursday.

Sharp currently faces lottery fraud charges (Iowa code 99G.36(2)) after the Mason City Police Department gave her a citation for that offense on July 30, 2012.  She will face an arraignment on August 13th at 9 AM in that case. 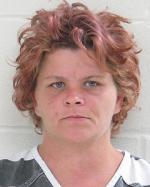 5 Responses to Mason City woman turns herself in on warrant