CLEAR LAKE – At approximately 10:00 pm on April 21st Clear lake Police Officers arrested 32 year old Edrick Morris of Clear Lake on two counts Committing Lascivious Acts with a Child, a class C felony. According to Police Chief Greg Peterson, the arrest is a culmination of an investigation that began on March 14, 2012. The charges stem from an incident in November of 2011 and another incident on March 14, 2012 at Morris’ residence where he allegedly committed sexual acts with a 13 year old female.

After his arrest, Morris was booked at the Clear Lake Police Department and then transported to the Cerro Gordo County Jail where he is currently being held. A cash only bond of $20,000 has been set for his release until his next court appearance scheduled for April 27, 2012. 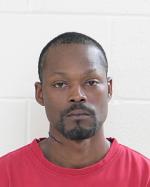