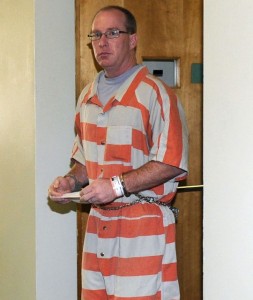 MODESTO, Calif. — The former teacher from Enochs High School in Modesto whose romance with one of his students drew attention from around the world a few weeks ago was arrested Friday on one count of oral copulation with a minor for an incident police said happened 14 years ago.

The charge stems from a relationship Christopher James Hooker allegedly had with a 17-year-old Davis High School student in 1998, where he was teaching at the time.

Hooker was arrested at his home Friday morning and booked into Stanislaus County Jail, police said.

Hooker, 41, moved in with Jordan Powers, 18, on Feb. 22, the day he resigned from Modesto City Schools. Powers had been one of his students at Enochs High.

Hooker said he left his wife and three daughters the week before. The school district had suspended him Feb. 3.

The couple met when Powers was a freshman at Enochs, but both say the romance didn’t bloom until months after she turned 18 on Sept. 5.

The victim in the case in which the charge was filed was a 17-year-old girl at Davis High. Hooker was a teacher at Davis at the time and later transferred to Enochs.

Hooker’s relationship with Powers came to public attention after the girl’s mother began castigating Hooker on her Facebook page.

“Yes, confirmed James Hooker is in custudy. I am with my daughter as I post this.”

She reunited with Jordan Powers and shortly after noon packed her daughter’s things at Hooker’s Modesto apartment.

She sent a text message to Modesto Bee reporter Nan Austin, saying she was taking Jordan to catch a flight to an undisclosed location Friday afternoon.

By midafternoon, more than 100 comments had been left on Tammie Powers’ Facebook page, many of them ripping into Hooker.

Since news of the affair became public, Hooker and Jordan Powers appeared on national TV talk shows. Kristin Olsen, a state assemblywoman from Modesto, introduced legislation that would outlaw teacher-student relationships and strip offending teachers of their pensions.

On her Twitter account, Olsen wrote: “So pleased to hear of James Hooker’s arrest! He has shown a pattern of predatory behavior and must be stopped.”