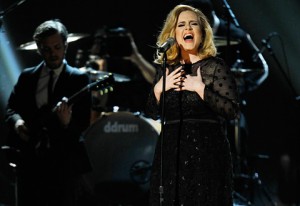 LOS ANGLES — Adele’s momentum is showing no signs of slowing. After winning six Grammy Awards and taking the top prize at the Brit Awards, the young soulful star bested a chart record set by another vocal powerhouse, the late Whitney Houston. Adele’s “21” coasted to another week at the top of the pop charts, giving it 21 nonconsecutive weeks in the pole position. That’s the most by any album in the modern sales era.

(PHOTO: Adele performs at the 54th Annual Grammy Awards at the Staples Center in Los Angeles, California, on Sunday, February 12, 2012.)

Buoyed by her Grammy wins and return to the stage after vocal cord surgery, “21” sold a mighty 730,000 copies in the United States for the week beginning Feb. 13, according to Nielsen SoundScan stats released by Billboard. The tally gives Adele her best sales week. The album, which has now remained in the top-10 for one full year, has sold more than 7.3 million copies.

With another week at No. 1, Adele has bested a chart record set by the Houston-led soundtrack to “The Bodyguard,” the Grammy album-of-the-year winner for 1992. SoundScan began providing accurate sales data for the music industry in 1991, and “The Bodyguard” had its run at the top of the charts beginning in late 1992.

Artists who perform at the Grammy Awards typically experience a sales bump in the days that follow, yet Adele’s 207-percent sales increase is rare any time of the year (the album sold 237,000 copies for the week ending Feb. 12). Adele’s “21” is the best sales week for an album since Lil Wayne’s “Tha Carter IV” debuted at No. 1 with 964,000 late last fall.

By comparison, last year’s album-of-the-year winners the Arcade Fire sold 41,000 copies of its “The Suburbs” in the first full sales week after the Grammy Awards. For the week heading into the awards, “The Suburbs” had sold 12,000 copies.