MENUMENU
This news story was published on February 5, 2012.
Advertise on NIT • Subscribe to NIT 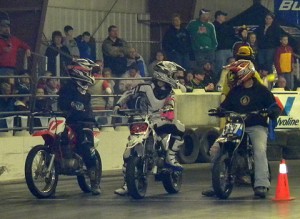 MASON CITY – The North Iowa Fair Association and Terrance Prochaska presented the second and final weekend of racing for “A Day of Thunder on the Syrup” this past Friday and Saturday at the North Iowa Fairgrounds.

Terrance Prochaska was not only the promoter, but also had some fun doing the partner motorcycle races.

Golf Cart races were held at this event; that was planned at the first event in January but didn’t make the show until this weekend.

“They were a little slower races, but fun to watch.” said Brandy Middlestedt. “They were still being as competitive as the rest. It’s just that they are bigger.”

Besides the golf carts, races with quads, motorcycles and go-carts of all ages and size were being raced.

The feature races started around 6:00 p.m. Saturday, and the winners of each class were presented with a trophy and a Monster drink.

The turn-out was about the same as the first race in January; it was a big hit both times.

There are already plans for the event to be held next winter at the North Iowa Fairgrounds.