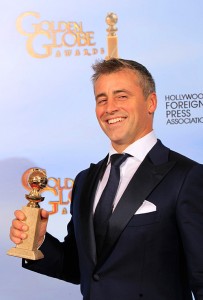 LOS ANGELES — Award season is often filled with riddles and mysteries, but few shows pack them in like the Golden Globes. On Sunday, “Game of Thrones” actor Peter Dinklage told viewers to Google a stranger’s name, an unfamiliar Turkish actress came on stage and wished for world peace, and Ryan Gosling (despite two nominations) was missing in action. We explain — as much as we can — what went down in the Beverly Hilton ballroom.

(PHOTO: Matt LeBlanc with his award backstage at the 69th Annual Golden Globe Awards show at the Beverly Hilton in Beverly Hills, California, on Sunday, January 15, 2012.)

Google who?: Dinklage, who won the Golden Globe for supporting actor in a series, miniseries or motion picture made for television, closed his acceptance speech by mentioning Martin Henderson, urging viewers to “Google him!” We did. Dinklage, who has a form of dwarfism and is 4 1/2-feet tall, was talking about a British man who was attacked last October while celebrating his 37th birthday. Henderson was thrown in an apparent “dwarf tossing” prank that left the man partially paralyzed and now using a wheelchair. “I guess I was an easy target and the only reason I was picked on was because I am small,” Henderson told London’s Telegraph newspaper. Police are investigating the incident.

Turkish delight: The proceedings took an odd turn with the appearance of Meltem Cumbul, a Turkish actress few viewers had ever heard of who was introduced as an “international film star.” Who is she? Cumbul has done a lot of screen roles in Turkey, where she’s known for the show “Yilan Hikayesi” (which, in case you were wondering, Wikipedia lists as “the highest rated program ever in the history of Turkish television”). “I grew up watching the (Globes), and it’s an honor to be with all of you tonight. Peace at home, peace in the world,” Cumbul said, before vanishing as quickly as she appeared. A Globes spokeswoman did not immediately reply to a request for further explanation of her appearance.

Silence is golden?: Jean Dujardin went silent when accepting his lead actor in a motion picture comedy or musical prize as an homage to “The Artist’s” lack of sound. But viewers also found the broadcast going quiet for a few seconds on two other occasions. First as presenters Antonio Banderas and Salma Hayek left the stage, host Ricky Gervais quipped, “I can’t understand a … word they’re saying.” And then during Meryl Streep’s acceptance speech for lead actress in a motion picture drama. The flustered actress let slip, “Oh, … I forgot my glasses.”

Tongue Twister: In response to Gervais’ jibe, Banderas said, “Let me answer to Ricky,” and then let loose with an animated, rapid-fire speech in Spanish before Hayek interrupted, “Ricky, I don’t understand him either.” Rather than amping up the insults, Banderas apparently was uttering a tongue twister popular in Spanish-language acting classes, used to improve diction, that involves a recitation of rhyming words. Whatever shots Banderas took at Gervais must have happened backstage.

Gosling gone?: He was nominated twice this year, for lead actor in a comedy/musical (“Crazy Stupid, Love”) and lead actor in a drama (“The Ides of March”). But where was the young comer? “Ides” co-star and director George Clooney noted backstage that, “He’s in Thailand,” referencing the Western film “Only God Forgives” that Gosling is preparing to shoot with “Drive” director Nicolas Refn. “And you know what you do in Thailand. He’s working. He wrote me a nice e-mail this morning. It happens. He’s gotta work. He’s a struggling actor.” But coincidentally or not, Gosling was also cultivating the myth of Gosling. As “Ides” writer Beau Willimon said on the red carpet, “He does his own thing.”