This news story was published on November 18, 2011.
Advertise on NIT • Subscribe to NIT

MASON CITY – The Cerro Gordo County Sheriff’s Office investigated a reported domestic assault and child endangerment incident on Thursday, November 17, 2011. The reported incident alleges that Christopher Heyden was pursuing his girlfriend’s vehicle with his vehicle at speeds that reached 90 miles per hour. The complaint alleges Heyden struck the girlfriend’s vehicle twice with his vehicle and a 9 year old female was a passenger in the Heyden vehicle during this incident. As a result of the investigation arrest warrants have been issued for Christopher John Heyden, age 27, of Plymouth, Iowa. Both charges against Christopher Heyden, Aggravated Domestic Assault and Child Endangerment, are Aggravated Misdemeanors. Christopher Heyden has not been located since the incident has been reported.

Christopher Heyden is a white male, 5’10” tall and weighs approximately 150 pounds. Heyden was last seen driving a tan 1999 Mazda Protégé with Iowa license 739XYZ. The public is urged to contact the Cerro Gordo County Sheriff’s Office at (641) 421-3000 if you have any information on the whereabouts of Christopher Heyden. 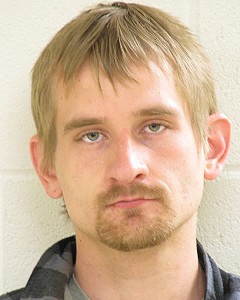