“Home for the Holidays” enjoyed by all at Southbridge Mall

This news story was published on November 18, 2011.
Advertise on NIT • Subscribe to NIT 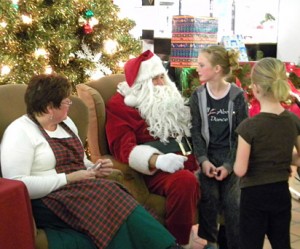 Santa and Mrs. Claus hear requests for presents from children.

MASON CITY – The annual “Home for the Holidays” was held at the Southbridge Mall Thursday night.  The festivities were enough to bring out the holiday spirit in anyone.

Christmas songs were being playing in the center of the mall, with little dancers, dancing their hearts out.  All of them with big smiles on their face.  Moms and dads watched proudly as their children enjoyed Christmas carols, recording every move they made.

What would Home for the Holidays be without a Santa Claus?  Well, there was no worrying about that.  Santa sat on his throne, sitting beside his precious wife, Mrs. Claus, getting pictures taken with all the good little boys and girls.  The children rested against Santa’s chest and looked up at him while they gave their list of wishes to him.   There were those few, that seeing Santa for the first time, didn’t know what to think, and weren’t quite sure if they wanted to get on his lap.  Eventually, giving in, hopped up and quietly told Santa what they wanted for Christmas.

After having their picture taken, two little ones got down off Santa’s lap, when the parents spoke up and asked, “Did you tell Santa what you wanted for Christmas?”  The children’s eyes popped, and said, “Oh, no!” and hopped back up to tell Santa about their special list of wants.

The Frels family had three children to snuggle in with Santa and Mrs. Claus; the newborn baby girl resting so comfortably in Santa’s arms.  The baby’s older brother and sister sat with big smiles on their faces, sending off their charm to ensure that they get what they asked for, for Christmas.

The Ciavarelli family was enjoying the Holiday fun by getting their two daughters face’s painted.  Both girls beamed with joy and excitement, showing off their new designs.

There was an ornament stand set up by “The Ornament Man”.  These ornaments were special because there were many different choices with the number of family members that would be in each individual family.  “Yes, I can be called The Ornament Man.  I will be here up until Christmas.  I will put the names of the family members on the ornaments any way a family would like them.  They are made to be unisex, so no matter what type of family you have, I would have an ornament for you.”  He also had Penguin plaques.  These are the same as the ornaments.  Different number of penguins for different numbers of people in each family.

It was just good family fun night at the Home for the Holidays at the mall.