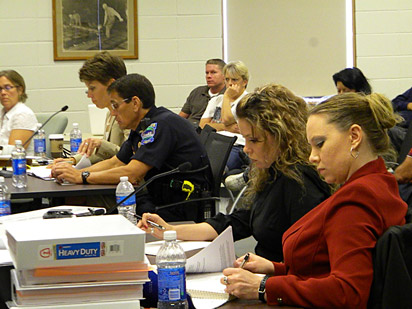 MASON CITY – The Mason City Civil Service Commission heard testimony in a hearing Tuesday, September 13th, 2011 regarding fired police officer Maria Ohl. The purpose of the proceedings is ultimately to determine whether Ohl can have her job back as a Mason City Police Officer. The hearing did not conclude Tuesday, and will pick up at 9 a.m. Friday.

Ohl represented herself at the hearing and has no attorney at this time. The City of Mason City was represented by Susan Bernau, of the Ahlers and Cooney law firm out of Des Moines. The Civil Service Commission is represented by Beth Hansen out of Waterloo. Hansen acted as the hearing ‘mediator’ and could over-rule or sustain objections and kept the hearing moving throughout the day.

Those that testified Tuesday were Mason City Police Chief Michael Lashbrook, who fired Ohl on August 4th; Neil Shultz, a retired Des Moines area detective, who completed an independent internal investigation into Ohl’s conduct as a police officer, specifically actions that ultimately got her fired; and Eva Christiansen, a 66 year-old psychologist out of Des Moines who specializes in assesments and completed a ‘fitness for duty’ examination of Maria Ohl in January of this year.

Police Chief Michael Lashbrook was called to testify after Bernau’s opening statement and Ohl declined to make a statement.

Lashbrook answered a series of questions from Bernau explaining how he met Ohl when he became Police Chief in January of 2007, all the way through August 4th of this year when he fired her. Lashbrook described how Ohl allegedly mishandled a tape recording that was stored on a squad car audio system. He said Ohl made her own copy of the audio on her own personal tape recorder and failed to turn her copy in at the station until much later (audio recorded in squad cars is automatically downloaded once the officer drives the squad car within a certain distance of the police station). Lashbrook also said that Ohl secretly taped a meeting he had with her. She later provided two CD’s to Lashbrook, one for each recording, on or about September 23, 2010. Lashbrook testified he was “offended” at Ohl’s secret tape recording of their conversation, calling it a “huge betrayal.”

Lashbrook testified that the reasons for Ohl’s termination were the results of her fitness for duty evaluation and the findings from Shultz’s internal investigation.

Watch video of Chief Lashbrook answer questions from Bernau regarding Ohl’s time at the MCPD and her termination:

Ohl followed with her own questioning of Lashbrook. Her questions centered around the “paper trails” of a typical internal investigation at the MCPD. Ohl questioned Lashbrook on which police officers might have access to evidence at certain times.

Shultz, the retired detective, found in his internal investigation that Ohl violated the following rules: Neglect of duty, insubordination, interfering with an investigation, security of records (duplicating records), and misuse of mobile audio video recording equipment.

Christiansen, the psychologist, testified that Ohl did “very well” in her IQ test but did not fully fill out forms she was asked to complete prior to her fitness for duty exam. Christiansen said that Ohl was not out of line by not fully completing the questions and that she still had enough material to complete the exam.

Christiansen found in her examination that Ohl is a “shy, socially awkward, introversive person who is uneasy in situations of emotional closeness” and “appears somewhat depressed and anxious.” Christiansen further found that Ohl is “not fit for duty” as a Mason City Police Officer due to her “lack of trust” for other officers on the MCPD and the fact that Ohl thinks that officers on the MCPD want to harm or kill her or her family.

Ohl questioned Christiansen to try to clarify whether her trust and fear issues with the MCPD would make her not fit to serve as a police officer at other law enforcement agencies or departments. Christiansen seemed to indicate that her findings were “only” related to the MCPD and could not answer how fit Ohl might be to work elsewhere.

The hearing picks up on Friday with the possibility that Ohl may testify; she has made no final decision on whether to testify. Her testimony would likely take the form of a “narrative,” Hansen stated, as Ohl would not be asking herself questions but would instead simply tell her story. Bernau would then have the opportunity to question Ohl.

The Jodi Huisentruit disappearance was brought up throughout the hearing. Ohl was said to drive to a sawmill in the Forest City area to look for a grave an informant had described.

The unsolved murder of Gerald Best was also brought up. At one point, a man was dismissed from the hearing as a potential witness in that case after briefly conferring with Ohl. That man’s name was blacked out of case exhibits to hide his identity. NorthIowaToday.com will not reveal the man’s name at this time. Ohl has said Lt. Logan Wernet of the Mason City Police Department was somehow involved in covering that case up.

Lashbrook testified that the Department of Criminal Investigation (DCI) said in a press release last week that no evidence could be found to link DCI or MCPD officers to the Huisentruit disappearance.

Ohl told NorthIowaToday.com after her last hearing that she was very concerned that officers she believes were involved in these crimes are still working as officers and that she just wants to clear her name and is seeking no financial gain.