Did MCPD play a role in disappearance of Jodi Huisentruit?

MASON CITY – Jodi Huisentruit vanished in 1995 on her way to work at KIMT TV with barely a trace left, except for a few clues, and the case has more or less went cold ever since. Rumors about her fate have since swirled not just locally, but nation-wide.

Now, the case may be heating up, as a former Mason City Police Officer says that current officers may have been involved with Huisentruit’s disappearance.

Maria Ohl (pictured, right), who was dismissed August 4th from the Mason City Police Department, says she has information implicating Lt. Ron Vande Weerd, Lt. Frank Stearns and Bill Basler of the (DCI) Iowa Division of Criminal Investigation. She says “it will all come out now” and says she has no doubt that the truth will be revealed about what really happened to KIMT anchor woman Jodi Huisentruit.

Ohl, 36, who once patrolled the streets of Mason City, had been relegated to desk duty for months at the Mason City Police Department by her superiors while legal action worked its way through the system.

She says on August 4th, Police Chief Michael Lashbrook (pictured, right) informed her in the MCPD lobby that she was terminated.

Ohl also says her own legal counsel, from Des Moines, abandoned her case and she is representing herself.

Ohl has a complaint pending in Federal Court alleging misconduct and discrimination by some of her former co-workers and officers. She says one officer pointed a weapon at her, and others made lewd and inappropriate remarks to her. She said her work environment was “tense” and little if any work was given to her while she was on desk duty. She says she is seeking no financial damages or rewards in her litigation against the City, and says she simply wants the truth to come out and her name cleared.

At a hearing in the basement of City Hall Thursday, her case went before the Mason City Civil Service Commission to determine a date and time for a hearing that would determine whether she can have her old job back at the MCPD. That hearing is set for September 13th at 9 a.m.

Ohl says both cases, the Federal case and the case awaiting a hearing with the Civil Service Commission, are “intertwined.” Ohl says she wants to go out “on her own terms” from the job she held for years, and says she is “horrified” that people that are supposed to be investigating the disappearance of Jodi Huisentruit may have actually been involved.

Ohl refused to give specifics of where the information came from, or who the actual person was providing the information that has led her to believe that the very people sworn to protect Mason City’s citizens may have made one of them disappear.

Ohl did say that others were likely involved in making Huisentruit vanish but would not provide specifics, instead saying again that “it will all come out.”

It seemed at least possible that one of Ohl’s sources is Pastor Shane Philpott, Ohl’s pastor and brother-in-law, who provided the Mason City Police Department with information in 2007 he obtained from a person in Minnesota. Philpott says in subsequent complaints he filed against the MCPD that a man called him and gave details about “the death and disappearance of Jodi Huisentruit”. Philpott says in the complaints that the information “incriminated current MCPD officers.”

Philpott alleges in his complaint that his information on Huisentruit was ignored by the MCPD.

Read this document for all the details from Philpott and his complaint against the MCPD. 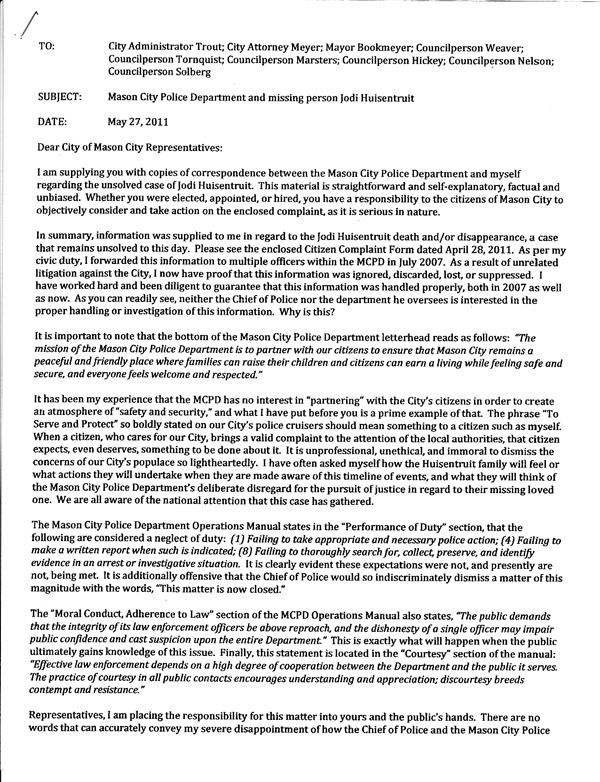