This news story was published on April 4, 2011.
Advertise on NIT • Subscribe to NIT

MASON CITY – On April 3rd, 2011 at approximately 12:13 AM Mason City police officers were called to the 500 block of 8th St. SE in Mason City for a disorderly / disturbance call. Upon officer’s arrival, Mason City Fire Department was also requested to respond to the scene. Jay Barrientes and Tony Walker, both of Mason City, were transported to Mercy Hospital East Campus for injuries received during a fight at the above location.

Mason City Police Department Criminal Investigations Division was called in and investigators arrested Brandon Kropf, age 19, and Jared Kropf, age 21, of Mason City for willful injury, a class “c” felony. A class “c” felony can be up to 10 years in prison and up to a $10,000 fine. This investigation is on going and any one with information on this incident is encouraged to call the Mason City Police Department. 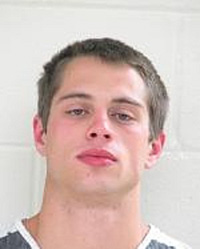