Pan Am Flight 103 terrorist suspect in custody for 1988 bombing over Lockerbie, Scotland that killed 190 Americans 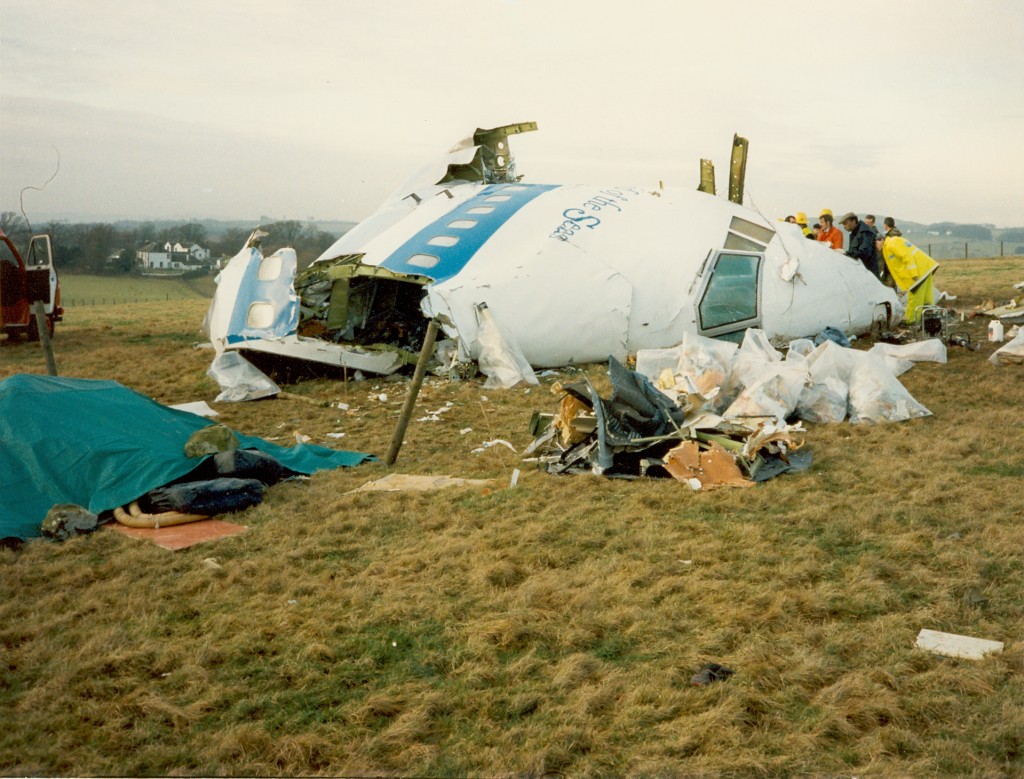 On Dec. 21, 2020, the Department of Justice made public a criminal complaint charging Mas’ud with destruction of aircraft resulting in death, and destruction of a vehicle used in foreign commerce by means of an explosive resulting in death. The United States subsequently requested the publication of an INTERPOL Red Notice – as is typical in cases involving foreign fugitives – requesting all INTERPOL member countries to locate and arrest the defendant for the purpose of his extradition or lawful return to the United States to face the charges. On Nov. 29, 2022, a federal grand jury formally indicted Mas’ud on the same charges contained in the criminal complaint. That indictment was unsealed today.

From the time the tragic events occurred in 1988 through the present, the United States and Scotland have jointly pursued justice for all the victims of the Pan Am 103 bombing. The partnership will continue throughout the prosecution of Mas’ud.

“Nearly 34 years ago, 270 people, including 190 Americans, were tragically killed in the terrorist bombing of Pan Am Flight 103. Since then, American and Scottish law enforcement have worked tirelessly to identify, find, and bring to justice the perpetrators of this horrific attack. Those relentless efforts over the past three decades led to the indictment and arrest of a former Libyan intelligence operative for his alleged role in building the bomb used in the attack,” said Attorney General Merrick B. Garland. “The defendant is currently in U.S. custody and is facing charges in the United States. This is an important step forward in our mission to honor the victims and pursue justice on behalf of their loved ones.”

“Today’s action is another crucial step in delivering justice for the victims of the senseless terrorist attack on Pan Am Flight 103,” said Deputy Attorney General Lisa O. Monaco. “Our thoughts are with the victims’ families, whose tireless work to honor the lives and legacies of their loved ones has inspired the Department of Justice and our Scottish partners throughout our investigation for the last 34 years. Let this be a reminder that the men and women of the Department of Justice will never forget the loss of innocent lives or waver in our commitment to holding terrorists accountable – no matter how long it takes.”

“While it has been nearly 34 years since the tragic bombing of Pan Am 103, the FBI and our partners throughout the U.S. government have never forgotten the Americans harmed and we will never rest until those responsible are brought to justice,” said FBI Director Christopher Wray. “Our reach and our memory are long, as this investigation shows. The progress we have made would not have been possible without the hard work and determination of the men and women of the FBI and the Justice Department, and the assistance of our Scottish partners. My thoughts today are focused on those lost and their loved ones as the work to achieve justice continues.”

“The Justice Department has worked for more than three decades to seek justice for the 270 innocent victims of the Pan Am 103 bombing,” said Assistant Attorney General Matthew G. Olsen of the Justice Department’s National Security Division. “Today, Mas’ud is charged for his alleged role in this heinous act of terror and he will appear in an American courtroom to answer for those crimes. To those who would seek to harm Americans anywhere in the world, know that we will find you however far you run and we will hold you accountable however how long it takes.”

“We never forget an act of terrorism against American citizens,” said U.S. Attorney Matthew M. Graves for the District of Columbia. “This defendant is charged with making the fateful decision to carry out a callous, cold-blooded act of terrorism, one that left behind devastation and despair for so many. Thanks to the vigilance, skill, and dedication of this team of investigators and prosecutors, and so many who preceded them in working on this case, the families of the victims will finally see a defendant face charges in a U.S. courtroom for his role in this heinous attack. This prosecution may bring little solace to those who have lost a child, a spouse, a parent, a sibling, a relative, or a friend. But we hope, today, the victims feel the embrace of the people who have poured their hearts and souls into bringing them a few steps closer to achieving some sense of justice for them and their loved ones.”

“We cannot heal the wounds left nearly 34 years ago, but we can and will continue to work to bring the justice that we can to the families of the victims of Pan Am 103. The lawful arrest and presentment in court of the alleged bombmaker, Abu Agila Mas’ud Kheir Al-Marimi, is the product of hard work and partnerships across the globe,” said Acting Assistant Director in Charge Michael H. Glasheen of the FBI Washington Field Office. “He will now face justice in the U.S. for the crimes he is charged with having committed decades ago against citizens of 21 countries. Thank you to the investigators, prosecutors, and victim advocates who have diligently and tirelessly continued to work for decades and across the globe to find answers about the horrific bombing of Pan Am 103. Most importantly, thank you to the families of the victims for showing us your perseverance and strength for decades. The U.S. government will also persevere in our quest to bring justice, on your behalf, for those we so tragically lost.”

At 7:03 pm (GMT), on Dec. 21, 1988, Pan Am Flight 103 was destroyed, almost instantaneously, 38 minutes after takeoff, when a bomb in the forward cargo area exploded. The plane was at 31,000 feet over Lockerbie, Scotland. It had taken off from London-Heathrow and was en route to John F. Kennedy Airport in New York.

Citizens from 21 countries were killed. Among the 190 Americans lost were 35 Syracuse University students returning home to the United States for the holidays after a semester studying abroad. Of the 43 victims from the United Kingdom, eleven residents of Lockerbie, Scotland perished on the ground as fiery debris from the falling aircraft destroyed an entire city block of homes. The international terrorist attack, planned and executed by Libyan intelligence operatives, was considered the largest international terrorist attack in both the United States and the United Kingdom at the time.

Immediately after the disaster, Scottish and American law enforcement undertook a joint investigation that was unprecedented in its scope and, in November 1991, it led to criminal charges filed in both countries charging two Libyan intelligence operatives – Abdel Baset Ali al-Megrahi (Megrahi) and Lamen Khalifa Fhimah (Fhimah) – for their roles in the bombing. They were tried in a Scottish court sitting in The Netherlands. Fhimah was acquitted. Megrahi was found guilty.

Planning and Executing the Bombing of Pan Am Flight 103

The December 2020 criminal complaint alleged that from approximately 1973 to 2011 Mas’ud worked for the External Security Organization (ESO), the Libyan intelligence service which conducted acts of terrorism against other nations, in various capacities including as a technical expert in building explosive devices. In the winter of 1988, Mas’ud was directed by a Libyan intelligence official to fly to Malta with a prepared suitcase. There he was met by Megrahi and Fhimah at the airport. Several days later, Megrahi and Fhimah instructed Mas’ud to set the timer on the device in the suitcase for the following morning, so that the explosion would occur exactly eleven hours later. Megrahi and Fhimah were both at the airport on the morning of Dec. 21, 1988, and Mas’ud handed the suitcase to Fhimah after Fhimah gave him a signal to do so. Fhimah then placed the suitcase on the conveyor belt. Subsequently, Mas’ud boarded a Libyan flight to Tripoli schedule to take off at 9:00 a.m.

According to the allegations in the complaint, three or four days after returning to Libya, Mas’ud and Megrahi met with a senior Libyan intelligence official, who thanked them for a successful operation. Approximately three months after that, Mas’ud and Fhimah met with then-Libyan leader Muamar Qaddafi, and others, who thanked them for carrying out a great national duty against the Americans, and Qaddafi added that the operation was a total success.

If convicted, Mas’ud faces a maximum penalty of life in prison. A federal district court judge will determine any sentence after considering the U.S. Sentencing Guidelines and other statutory factors.

The FBI Washington Field Office is investigating the case along with prosecutors from the National Security Section of the U.S. Attorney’s Office for the District of Columbia and the Counterterrorism Section of the Justice Department’s National Security Division. The Justice Department’s Office of International Affairs and the U.S. National Central Bureau provided valuable assistance in this matter.

Victims of this crime and their families may contact the Department of Justice on the VNS website at https://www.notify.usdoj.gov.

(PHOTO: Investigators examine the wreckage of Pan Am Flight 103, which exploded over Lockerbie, Scotland on December 21, 1988.)