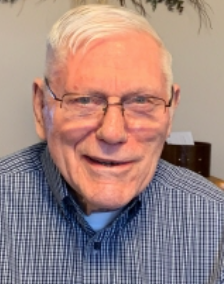 A funeral service for Leon McDermott will be held at 11:00 a.m. on Wednesday, November 30, 2022, at Hauser Weishaar Funeral Home, with John Scheidecker officiating. Visitation will precede the service beginning at 10:00 a.m. Burial will be at Riverside Cemetery, Charles City, IA.

Leon was born April 9, 1930, to Leo and Hazel (Newton) McDermott. He grew up on his father’s farm near Floyd, IA. He married Jeanette Swink the woman he was smitten by at a dance in Omaha, NE. Leon and Jeanette were joined into marriage February 4, 1956, in Danbury, Iowa. They celebrated 63 years of marriage together before the passing of Jeanette on November 19, 2019.

Leon was an only child and grew up through the depression and understood a hard day’s work with minimal pay. He shared how he had the bare necessities and if you didn’t work you didn’t eat. He explained there was no government “welfare” only temporary government “relief”. Leon served in the US Army in radar repair, he traveled to Germany, England, and France. He loved to share his army stories. After Leon served in the Army for 4 years he met and married the love of his life, Jeanette and made their home in Floyd, Iowa.

Leon was an entrepreneur at heart, starting McDermott TV Sales and Service in the front porch area of his one-bedroom home in Floyd, IA. Later, he purchased a home in Charles City, bought a building on North Main Street and expanded his TV sales and service business. In addition to his business on Main Street he opened MACSAT Satellite Systems Manufacturing. Leon loved the stock market, reading books, gardening, bicycling, wood chopping, hiking, playing Pfeffer, and woodworking. He loved his bacon and scrambled eggs!

Leon made the most important decision of his 92 years of life, on November 13, 2022. He accepted Jesus as his Lord and Savior. Romans 10:9 “If you openly declare that Jesus is Lord and believe in your heart that God raised him from the dead, you will be saved.” Let us rejoice Leon is in his eternal home in heaven!

Leon was preceded in death by his parents and his beloved wife Jeanette.