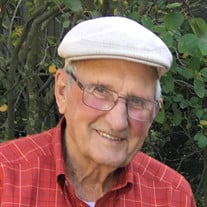 The family will greet friends and serve refreshments from 9:30 am until 11:30 am at the funeral home on Saturday.

Bob attended Buffalo Center schools and graduated from Britt High School, Britt, Iowa. He served in the US Navy during the Korean War. Following his discharge, he returned to North Iowa and began working in the construction business.

He was united in marriage to Arlene Joy Stoltenberg at the Little Brown Church, Nashua, on August 14, 1955.

Bob owned and operated his own construction company in Mason City for many years, R. W. Gilbert Construction, where he built numerous homes and helped develop several areas in Mason City.

Bob was a devoted husband, father, grandfather and great grandfather. He will be dearly missed by all. Among the many things he will be remembered for is handing out two dollar bills. He took great pride in sharing them with family and friends, especially his grandchildren and great grandchildren, many of whom still carry a $2 bill in their wallet to this day.