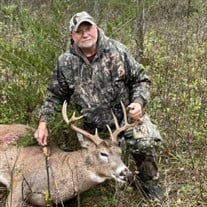 Michael J. Flitcroft, 74 of Rockford passed away doing what he loved, hunting, surrounded by nature on November 15, 2022.

Michael J. Flitcroft, 74 of Rockford passed away doing what he loved, hunting, surrounded by nature on November 15, 2022.

The family plans to celebrate his life in a private gathering in the future.

Michael Joseph Flitcroft was born February 8, 1948 in Fond du Lac, Wisconsin, the son of Joseph Frederick and Marjorie Ann (Deitte) Flitcroft. Growing up in the area, Mike graduated from Goodrich High School and soon after began his honorable service in the United States Navy during the Vietnam War. He was stationed in Norfolk, Virginia on the U.S.S. Guadalcanal Helicopter carrier. On May 11, 1968 he married his highschool sweetheart, Vicky Lynn Beahm, and was flown in by helicopter on a special mission to get him home on time for their wedding. The couple had two children, Shawn and Tracy. Starting their life together in Wisconsin, Mike worked for the Soo Line Railroad, later transferring to Mason City with the CP Railroad. Life took Mike and Vicky to St. Paul, Minnesota before returning to Iowa following his retirement in 2008.

Mike found his peace in the outdoors. Whether it was his annual trip to Wisconsin for deer season with friends, tending to his ever growing garden, feeding the birds, or just a long walk out in the woods, he enjoyed nature to its fullest. The recent addition of a puppy named Teddy, kept Mike on his toes and filled his heart with love. But, most of all, Mike’s life was his family. He looked forward to time spent with his children and grandchildren, attending their games and events. He enjoyed cooking for family and friends including making his famous omelets and grilling year round. He loved them all dearly and will be missed just as much.

Preceding him in death are his parents, grandparents, and a brother, Richard Flitcroft.