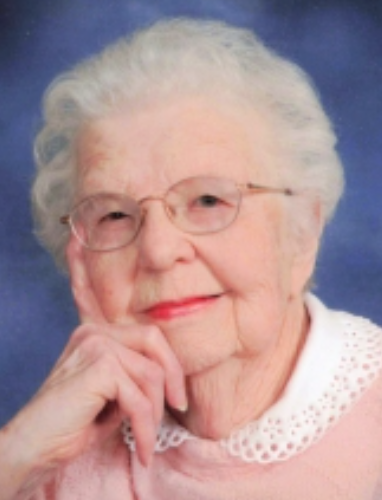 Interment will be held in Elmwood-St. Joseph Cemetery.

A visitation will be held at Faith Baptist Church on Saturday beginning at 9 a.m. until the service time.

Services will be livestreamed on Major Erickson’s Facebook Page.

Memorials may be directed to KCMR Radio, Community Kitchen or Salvation Army.

Irma R. Harris was born on March 19, 1923, in Sheffield, Iowa, the daughter of Raymond L. and Elsie C. (Kruse) Harris. She grew up on a farm near Sheffield, attending rural school, Sheffield High School, Mason City Junior College, and Cedar Falls Teachers College. She then attended classes at various other colleges.

Irma taught in rural schools, Eagle Grove Community School, and Mason City Community School before retiring in 1985. Since retiring she was privileged to travel to more than twenty foreign countries and later presented slide programs to various groups.

She had accepted Christ as her Savior as a teenager. Irma was a member of Faith Baptist Church serving in various roles throughout the years.

She was very interested in researching family history and upon retiring acquired her first computer. She had found that to be a very valuable tool. She had compiled a Harris Family Book. Irma also compiled a book of her life’s experiences growing up with fewer conveniences than we have now.