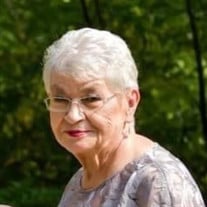 Rose’s family will greet relatives and friends beginning at 9:00 am until the time of her service on Monday.

Rose Marie was born on August 25, 1942, the eldest of five children born to Glenn and Angeline (Toye) Sheka. She attended and graduated from Grafton High School where she received the “Betty Crocker Homemaker of Tomorrow” award. Following high school she attended Hamilton Business College.

On February 1, 1964 Rose was united in marriage to W. Michael Fritz at St. Michael’s Catholic Church in Plymouth. They would be blessed with four daughters, Brenda, Cheryl, Anne, and Kathryn.

Rosie began her secretarial career as the first secretary for Newman Catholic High School after graduating from Hamilton Business School. From there she worked for A.C. Nielsen, the Cerro Gordo County Courthouse and H and R Block before eventually retiring as the secretary for Berry Law Firm.

Following Rose and Mike’s retirement they moved to Lakeville, MN to support their granddaughter’s dream of playing hockey. They were always very involved in their grandchildren’s endeavors and loved cheering them on in their athletic and academic ventures. In October of 2011 Rose and Mike returned to Mason City.

Rosie loved to travel in her later years and was a platinum member with Carnival Cruises. She was a fantastic baker who was known for her cupcakes and cinnamon rolls. When she wasn’t busy in the kitchen she could be found playing cards with her weekly card clubs and visiting with friends.

She is preceded in death by her parents; husband, W. Michael Fritz; daughter, Brenda Fritz; and brother in law, Wes Combs.