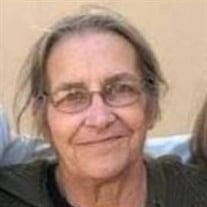 Patty was born October 29, 1957 in Mason City, daughter of Phil and Mary (Tenney) Seely. She grew up in a military family and spent her childhood in many places all over the United States. Later in life, she obtained her GED. She was a loving and devoted mother to her daughters. She absolutely cherished spending time with her ten grandchildren and two great-grandchildren.

Patty loved to read murder mysteries, especially Dean Koontz and Stephen King. She also enjoyed browsing her social media. Patty also liked her crossword puzzles and word search games. She was a crafty woman and was well known for her cooking and baking. Her chocolate chip cookies were hands down the most popular amongst her friends and family.

Patty was preceded in death by her daughter, Emily Hjelle, her parents Phil and Mary Seely and fathers of her children, Merle Hjelle and Jim Schriever.

A celebration of life will be held at a later date. If you would like to mail a card please send to Hannah Schriever 144 Lobdell Rd., Waterloo, Iowa 50701.