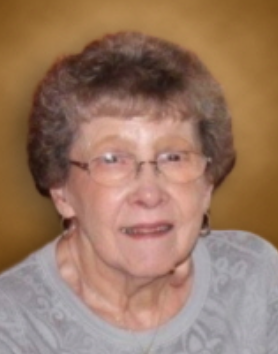 A funeral mass for Yvonne Holtzbauer of Algona will be held Friday, August 12, 2022, at 10:30 AM at Divine Mercy Parish ~ St. Cecelia Catholic Church in Algona. The funeral will be livestreamed on the Divine Mercy YouTube page. Burial will follow at Calvary Cemetery. The graveside service will be livestreamed on Oakcrest Funeral Services Facebook page. Her family will greet friends from 5 to 7 PM Thursday, August 11, 2022, at Oakcrest Funeral Services of Algona with a scripture prayer service beginning at 7 PM. In lieu of flowers, memorials will be directed to Calvary Cemetery, Hospice of the Heartland, Algona Library, and the Algona Manor in Yvonne’s memory.

Yvonne Ann (Ericson) Holtzbauer was born December 19, 1935, in Lu Verne, to Helen A. (Radil) and Eric. R. Ericson. Yvonne went to a Country School in Irvington, started High School in Lu Verne then went to Algona High School her Sophomore year. Yvonne was employed at JC Penney’s in High School. Yvonne married Robert (Bob) Holtzbauer February 25, 1954, at St. Cecelia’s in Algona. After her children were raised she worked at Maggie’s Ice Cream Parlor then worked at the Algona Library for 24 years.

Yvonne enjoyed spending time with her family, traveling, reading, doing Word Search, gardening and her flowers. She was a member of St. Cecelia’s Church and active in Church circles. Yvonne passed away on Saturday, August 6, 2022, at the Algona Manor. She was 86.