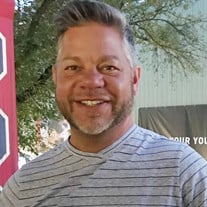 Andrew E. Ziesmer, 54, of Arlington Heights, IL, and formerly of Ventura, passed away Monday, August 8, 2022 at his home.

Andrew E. Ziesmer, born April 4, 1968, known as “ZEE” to his friends, passed away Monday, August 8 at his home in Arlington Heights, Illinois. ZEE was a top shelf story teller, a trait he learned from his father, LeRoy.

The youngest of 5 siblings, Andy enjoyed lots of attention and got away with things the other four would never have dreamed of doing! He had his parents wrapped firmly around his little finger and he was always a source of laughter to his siblings. As a young adult when he entered the business world and decided to be ‘Andrew’, it took his family a minute to make the change.

Andrew was married to Jean Prochaska in 1992. He once said that the chapel for the ceremony was so small that there was barely room for the proverbial church mouse to cross his legs and relax.

Among his many accomplishments were raising 3 wonderful children, becoming a managing director at Citigroup, and jumping out of a perfectly good airplane. Talking with Andrew always led to his sharing a story or two (or three!) about Olivia’s dance efforts and her future plans, Zach’s business prowess and the times they spent together, and lately lots of talk about Amanda’s upcoming wedding and a purchase of a first home. He was one proud Dad!

He was very proud of his business successes and over the years there were many. After college, he entered the world of business, working for Greentree Financial and then Citigroup for approximately 30 years. He lived by the motto, “good looks will get your foot in the door, but nice hair will blow the hinges right off of it”. His college roommates used to wait hours for him to perfect his hair before he would leave his Sigma Phi Epsilon fraternity house.

Andrew’s favorite things in life were his family, a good bass riff, and little known facts about music and sports. He was a super fan of the Minnesota Vikings, Minnesota Twins, Iowa State Cyclones, Depeche Mode, The Cure, and New Order.