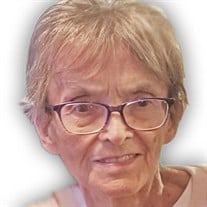 Sharon Lee Keeney, 75, passed away peacefully on Friday July 22, 2022 in her Clear Lake, IA, home surrounded by loved ones.

Sharon was born on January 13, 1947, the daughter of Glenn and Pearl (Coonrod) Keeney of Plymouth, IA. She attended Mason City High School and later studied art. In 1969, Sharon became a mother to her first child, Jody, and then her second child in 1974, Danyelle, and they lived in Mason City. A few years later, she moved the family to Belvidere, IL, where she worked as a seamstress until returning to Clear Lake, IA, for the remainder of her life. Sharon worked as a housekeeper for over thirty years, she enjoyed meeting new people and helping them with their needs.

In her free time Sharon enjoyed sewing, painting ceramics, drawing, gardening flowers and plants and tending to her indoor “jungle” of plants. She was an animal lover her whole life, especially horses, dogs and cats. Sharon loved old country music, artists like Loretta Lynn, Patsy Cline, Alan Jackson and Johnny Cash were often playing in her home. She was a part of the Clear Lake Community Flower Club and helped keep the flower bed corners of her town looking beautiful. Her annual vacation was most commonly spent visiting her second home in Belvidere, IL, to see her family and friends. Sharon loved being a grandma (mimi) to her three grandchildren.