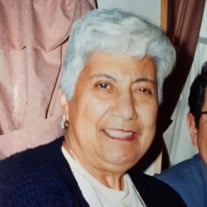 Mickey, Eleanor, and their siblings grew up in the Lehigh Row neighborhood and graduated from Holy Family High School.

Mickey went on to join the United States Navy WAVES as an Aviation Machinist’s Mate during World War II. She obtained the rank of Class C and was honorably discharged in December of 1945. She later married Harold Witt and they had two children, Ed and Carol Witt. Harold and Mickey lived in Mason City where she attended Mason City Junior College. They moved to Chicago, IL where she worked for International Telephone and Telegraph. She was registrar for foreign students at their technical school. When they moved to Columbia, MO she was bored with retirement so went to work with the department of agriculture at the University of Missouri. After retiring for the second time she and Harold moved to Tucson, AZ. Later they returned to Mason City specifically so Mickey could spend more time with her brother Ralph and his wife Joan, her sister and brother-in-law Julie and Bill Carey, and her cousin Peter Vega. Eleanor was a frequent visitor during those years. Five years after Harold’s death, she moved to Long Beach with her daughter.

She enjoyed reading, especially her spy novels and mysteries. Although she learned how to fix airplanes during the war, she never did learn how to drive a car. She enjoyed listening to music, especially the music of Frank Sinatra and Elvis Presley. She was a loving wife, mother, grandmother, aunt, and sister.