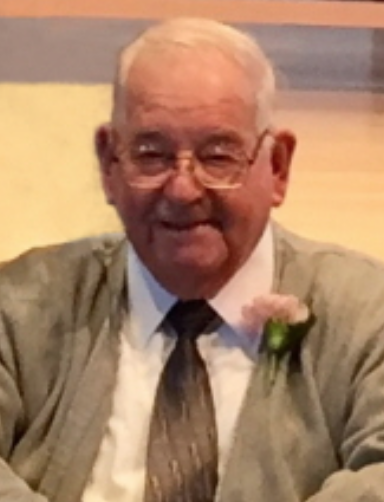 A funeral Mass for Russell Tolliver will be held at 11:00 a.m. on Saturday, July 9, 2022 at Immaculate Conception Catholic Church in Charles City with Reverend Tom Heathershaw officiating. Burial will be at Calvary Cemetery in Charles City.

Visitation will be held one hour before the service at the church on Saturday.

Russell Eugene Tolliver, the son of Eugene Virgil and Ruby Irene (Tubbs) Tolliver, was born May 22, 1926 in Charles City, Iowa. He attended country school through 8th grade and graduated from Charles City High School in 1943. On July 24, 1951, he married Margaret Merfeld and they were blessed to have four children: Michael, Diane, Janet and Judy.

Russell proudly served his country in the U. S. Army. He joined the Army in March 1951 and was stationed in Germany as part of the Occupation Army until his honorable discharge in March 1953.

Farming was always a passion for Russell. After high school graduation, he worked with his father on the Tolliver family farm southwest of Charles City. In March 1956, Russell moved his family into the farm homestead and resided there until his retirement from farming in July 2001. Throughout the years, Russell totally enjoyed the rural lifestyle and felt it was a wonderful place for his children to grow up in.

Family time (both immediate and extended) was a priority for Russell. He enjoyed many family gatherings and visiting his adult children and grandchildren in their homes. Russell loved to create and build things. He was an excellent woodworker and made many pieces of hand crafted furniture as well as smaller keepsakes. He also completed many upgrades to their homes (both on the farm and in town). Russell also enjoyed serving on the Elevator Board, attending farmer’s education classes, traveling with his wife, playing ‘500’ in card groups, watching TV, reading and solving Sudoku puzzles.

Russell was preceded in death by his wife, Margaret in August 2012 and son, Michael in April 2020.

Memorial gifts should be given to a Hospice organization in your local community.