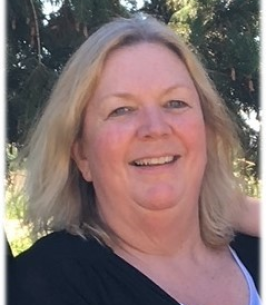 Lisa graduated from Graettinger High School in 1979. On December 12, 1987, she was united in marriage to Jerry Hovinga at the United Methodist Church in Graettinger. The couple made their home southeast of Graettinger, where they farmed and raised their children. Lisa worked at Upper Des Moines and EPS throughout the years. She had a love for the 5 o’clock hour and free spins.

Lisa was very active in the Graettinger Community. For many years she was on boards for the Labor Day Committee, Hillcrest Golf Course, and the Graettinger School Foundation. Taking vacations, being outside, and traveling were all things that brought joy to Lisa. She had a passion for the Iowa Hawkeyes, especially the football team, attending many games. She had a great sense of humor. Her family, especially her grandchildren, were the things that brought her the greatest happiness in life.

Lisa is survived by her husband Jerry of Emmetsburg; her children Nathan Hovinga (special friend Heather Cochran) of Algona and Dakota (Brandon) Laidig of Tiffin; and four grandchildren Kaylee Hovinga and Levi, Owen, and Graham Laidig. She is also survived by her brother Doug (Mary) Herke, cousin Jackie Holm, and a host of nieces, nephews, and cousins.

Lisa is preceded in death by her parents, her sister Diane (Tony) Alesch, and her nephew Douglas Herke.