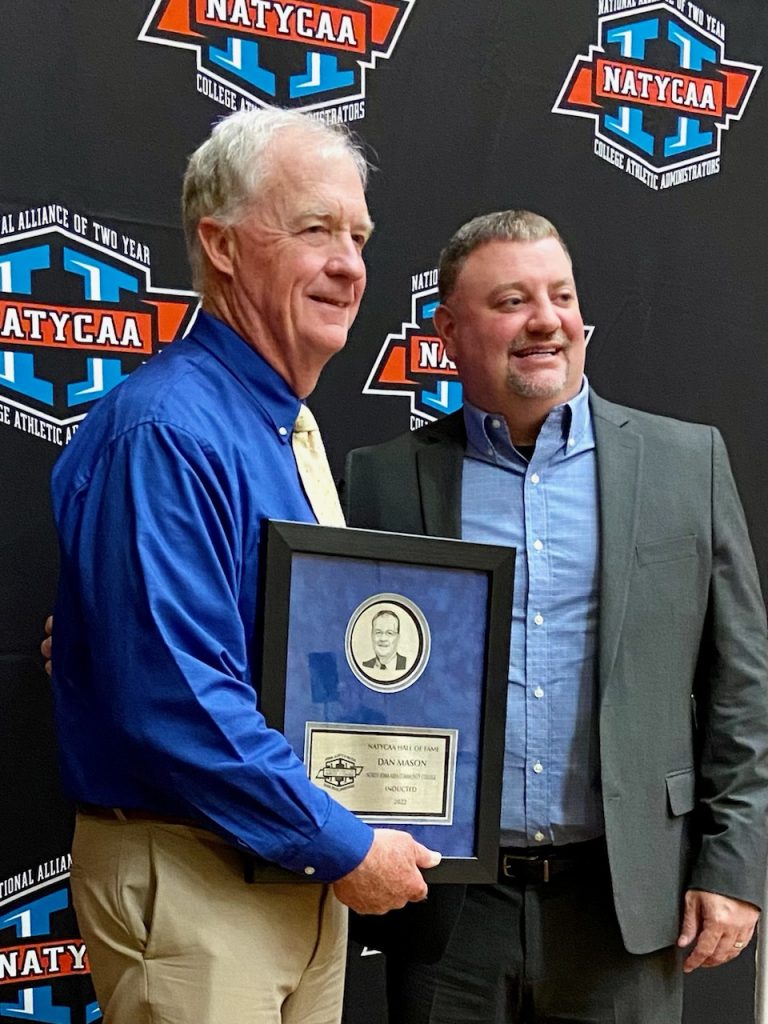 Mason was honored on Monday at the 2022 NATYCAA awards luncheon.

Established in 2004, the NATYCAA Hall of Fame was created to honor those outstanding individuals who have excelled in athletics administration on the local, regional and national levels.

Mason retired as the North Iowa Area Community College athletic director on June 30, 2021, ending 27 years of service as a coach and administrator at the two-year college level.

Mason’s coaching career, which began in 1983, has spanned both the high school and collegiate ranks.

Although basketball is where he enjoyed the most success, his introduction to two-year athletics was on the diamond, where he was head baseball coach at then-NJCAA member Waldorf College for the 1986, 1987 and 1988 seasons.

Following his initial season in the dugout, he was approached about filling the vacancy for the men’s basketball head coach job and pulled double-duty at Waldorf for the next two seasons before going all in on the hardwood, beginning with the 1988-89 campaign.
In 1993, Mason made the move to Waldorf’s arch-rival, NIACC, fittingly located in Mason City, Iowa. His first NIACC team won 20 games but lost in the second round of the Region XI tournament. What followed was the most successful season in the history of the program.

The 1994-95 Trojans won the Region XI tournament to advance to nationals then captured the NJCAA Division II National Championship with a 64-63 win over Grand Rapids (Mich.) Community College. NIACC finished its championship season with a record of 27-6, and Mason was named NJCAA Division II Coach of the Year.

Mason coached the Trojans through the 1996-97 season, accumulating a career record of 69-61. After leaving NIACC, he coached NCAA DIII Central College for seven seasons (1997-2004).

Mason returned to NIACC in 2006, this time as the College’s athletics director, where he was responsible for every aspect of the Trojans’ 16 teams: scheduling, purchasing, hiring and evaluation of coaches, compliance, facilities supervision and preparation, concessions scheduling and purchasing, drug testing, student insurance, and student discipline. Through a dedicated commitment to leadership and unparalleled work ethic, Mason developed a culture of success that will carry on long after his retirement and, in the process, accomplished two of his main goals: building a new recreational center and re-establishing the College’s wrestling program.

That year, Mason received the NJCAA’s prestigious Mary Ellen Leicht Service Award, presented to individuals who have made significant contributions to two-year athletics on a national level for an extended period.

A former collegiate student-athlete, Mason was named to the 1983 NCAA DIII All-America baseball team after posting a 14-1 record for North Park College, where he was inducted into the Hall of Fame in 1987.

Mason is also noted for his love of community. For more than quarter-century, he has been actively involved in the Fellowship of Christian Athletes, speaking at numerous camps and clinics. In 2021, he received the Mason City Noon Rotary Club’s “Service Above Self Award,” the highest honor given for public service in the community.

About NATYCAA: Now in its 34th year, NATYCAA is the professional organization of two-year college athletics administrators and membership open to all two-year institutions from throughout the country. NATYCAA is administered by the National Association of Collegiate Directors of Athletics (NACDA), which is in its 57th year. For more information on NACDA and the 18 professional associations that fall under its umbrella, please visit www.nacda.com.