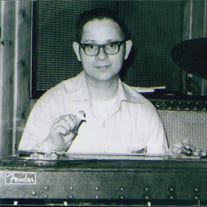 Visitation will be held one hour prior to the memorial service from 12:00pm to 1:00pm.

Richard was born July 24, 1937, the son of William and Edna (Miller) Craig of Mason City, IA. He attended Mason City High School. In June of 1963 Richard was drafted into the Army, where he cooked for fellow comrades, as well as playing his guitar for entertainment during field training. On July 13, 1963, in Waynesville, MI, Richard married Eva Young. He spent his life as a welder at several different companies. Some of the other positions he held was being a Janitor at Kraft, and North West Janitorial.

Two of his biggest passions were photography and performing in the band where he played steel guitar and sang. His band first began as Little Dicky T and the Travelers, which later he moved to California and played and sang in the Wes Rio Band. Richard was the number one steel guitar player in San Diego, CA. He returned to Mason City and joined a band called Cabin Fever, where he played for many years. His most recent performance was at his 50th wedding anniversary in 2013.

Richard is preceded in death by both of his parents; children, Duane Craig, and Mary Craig; a grandson, Devon Craig; brothers, Bob, Bill and Bruce Craig.