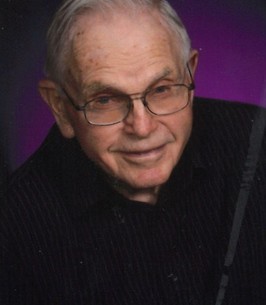 Albert Packard Swartz was born in Emmet County, Iowa on October 24, 1924 to Lawrence Elmer and Elsie Lena (Packard) Swartz. He passed away on Saturday, April 9, 2022 at Good Samaritan Nursing Home in Estherville, Iowa at the age of 97.

Albert attended Swan Lake Consolidated School at Maple Hill, Iowa, graduating in the class of 1942. In 1945 he was drafted to serve in the United States Navy. He served in World War II and was honorably discharged in 1946. He then attended the University of Minnesota for a short time. Upon his return to Iowa, he farmed near Maple Hill and in 1955 he purchased a farm near Dolliver. On August 18, 1956, he was united in marriage to Carol Ella Berchenbriter at the Methodist Church in Estherville. The couple made their home on the rural Dolliver farm. Besides farming, Albert worked as an income tax preparer since 1956, employed at Emmet County State Bank and later at Anderson, Pelzer, & Hart, retiring in 1999.

Albert was a lifelong member of the United Methodist Church in Estherville. He was a member of various committees and held many offices throughout the years. He was very active as an officer in the United Methodist Men. Albert served on the Lincoln Central School Board for 10 years. Being active in the Emmet County farming community was very important to Albert. He was a member and officer of the Emmet County Farm Bureau, Cattlemen’s Association, and Pork Producers. He also served on the boards of the Quad County Farm Service and Des Moines River Conservancy District. He was an Emmet County Soil Conservation Commissioner for many years. Albert was on the Emmet County Board of Review, and a crop reporter for USDA National Agriculture Statistics Service for many years. In 1981, he was named the Iowa Conservation Farmer of the Year.

When not farming or protecting the soil for future generations, Albert enjoyed drives in the country. He also enjoyed reading and singing. The family took vacation every year, sometimes starting out and not knowing where they would end up.

He is preceded in death by his parents his brother Leonard (Darlene) Swartz, and his sister Nada (Palmer) Halverson.