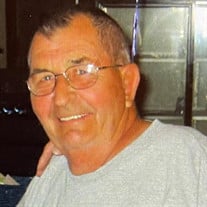 Per Gene’s wishes, his body has been cremated and a Mass of Christian Burial will be held Saturday, March 26 at 11:00 am at St. Patrick’s Catholic Church in Clear Lake. The family will greet friends at 9:30-11:00 am and after the mass with lunch. The service will be live streamed on the St. Patrick’s Catholic Church website: stpatrickcommunity.com
Inurnment will be at Ventura Cemetery in Ventura, IA later this summer.

A graduate of Sacred Heart High School, Pocahontas, Gene then began working for Travelers Life Insurance Company. He later would work for Bell Brothers Heating and Cooling and retired from Firestone. During retirement, he and Dory moved to Clear Lake where Gene began working for Secory Plumbing and Heating, which he thoroughly enjoyed.

To this day, Gene is still remembered by the red socks he wore for nearly 25 years while coaching 8th grade basketball at All Saints School and St. Peter’s School in Des Moines. He and his family created many memories while holding season tickets to Iowa Hawkeye football games and attending many basketball games over the years. He was an avid Chicago Cubs baseball fan, and for over 20 years would winter in Mesa, AZ where the Cubs would play their spring training games.

Gene was a member of St. Patrick’s Catholic Church and Knights of Columbus Council 7898, both in Clear Lake, where he always liked helping with the Knights’ annual Irish Stew. He took great pride in and cherished being able to attend all of his grandchildren’s events, whether it was in Clear Lake, or involved a drive to Des Moines. During most summers, many could find him fishing from the 15th St. dock in Clear Lake. Gene loved Clear Lake and made many friends with his outgoing personality. Truly, he never met a stranger.