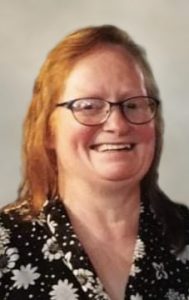 Debra Sue, daughter of Clarence and Mary Ann (Weydert) Golwitzer, was born September 18, 1960, in Algona, Iowa. She attended St. Joseph Catholic School in Wesley, Iowa, and graduated from Bishop Garrigan Catholic High School in 1979. A year later, Deb received her diploma from Capri Cosmetology in Mason City, Iowa. She lived in Iowa City, Iowa for a few years, working as a hairdresser. She then moved to Wesley and owned and operated her own beauty salon there. She was married to Scott Bertelsen in 1988 at St. Joseph Catholic Church in Wesley. Her son Eric was born in 1989, then son Josh was born in 1992. She was a stay-at-home mom until her children were old enough to attend school. In 2002 she moved with her boys to Forest City, Iowa. Deb worked in the cafeteria at Waldorf College in Forest City from 1997 to present, a period of 25 years.

Deb loved to cook, was a hard worker, and had an appreciation for the fine arts. She occasionally sang for weddings and other special events. Deb liked to garden, go for walks, go out to eat, and watch movies. Deb was a very giving person. She shared photos she took with the Facebook group Iowa Through the Lens, supporting conservation through photography. Deb was also involved with another Facebook group, Butterfly Ninjas, supporting victims of domestic abuse. She lived a simple life and was not concerned about material things. What mattered most was time spent with her family and loved ones.